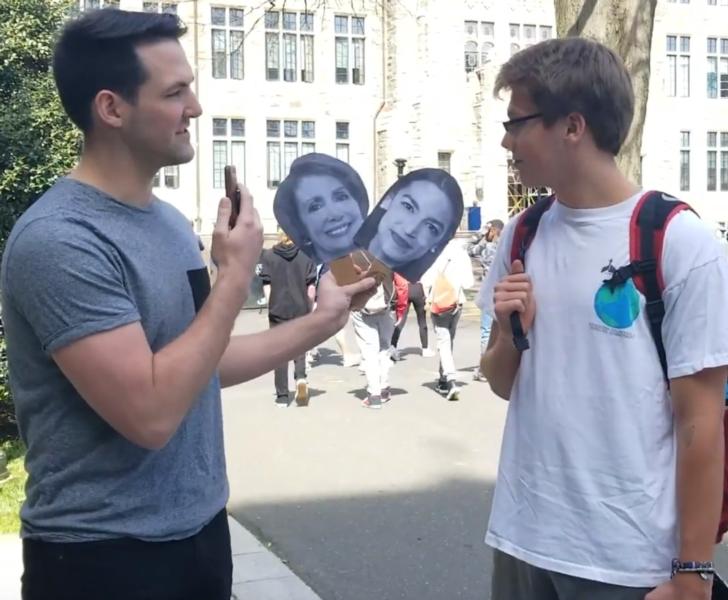 With the 2020 presidential election just 18 months away, the Democrat party is undergoing an internal struggle for power between the old guard, led by Speaker Nancy Pelosi, and the newer, more radical element led by Congresswoman Alexandria Ocasio-Cortez. While Pelosi clearly wields more congressional power, Ocasio-Cortez has shown an almost unrivaled ability to single-handedly drive the national conversation.

Often focusing on policies like the Green New Deal and universal basic income, Ocasio-Cortez has quickly become the most talked about member of the Democrat party.

But do people view her as the new face of the party?

"We’re in a time of extremes, she’s pulling pretty far to the left, and I think people are going to like it"

Wanting to know what college students had to say, Campus Reform's Cabot Phillips headed to Georgetown University to ask a simple question: “Between Nancy Pelosi and Alexandria Ocasio-Cortez, who do you view as the face of the Democrat party?”

The results were overwhelmingly in Ocasio-Cortez’s favor.

“She’s got the people. We’re in a time of extremes, she’s pulling pretty far to the left, and I think people are going to like it,” one student said, while another added, “she represents a new progressive thing that’s pretty prevalent on college campuses.”

Multiple students raised the generational aspect, saying, “as the millennial base participates more in politics... there’s gonna be a lot more people that steer in a Democratic Socialist direction,” and “I see the Democrat party moving towards a more liberal, progressive, younger generation.”

What did other students have to say? Did anyone choose Speaker Pelosi? Watch the full video to find out: