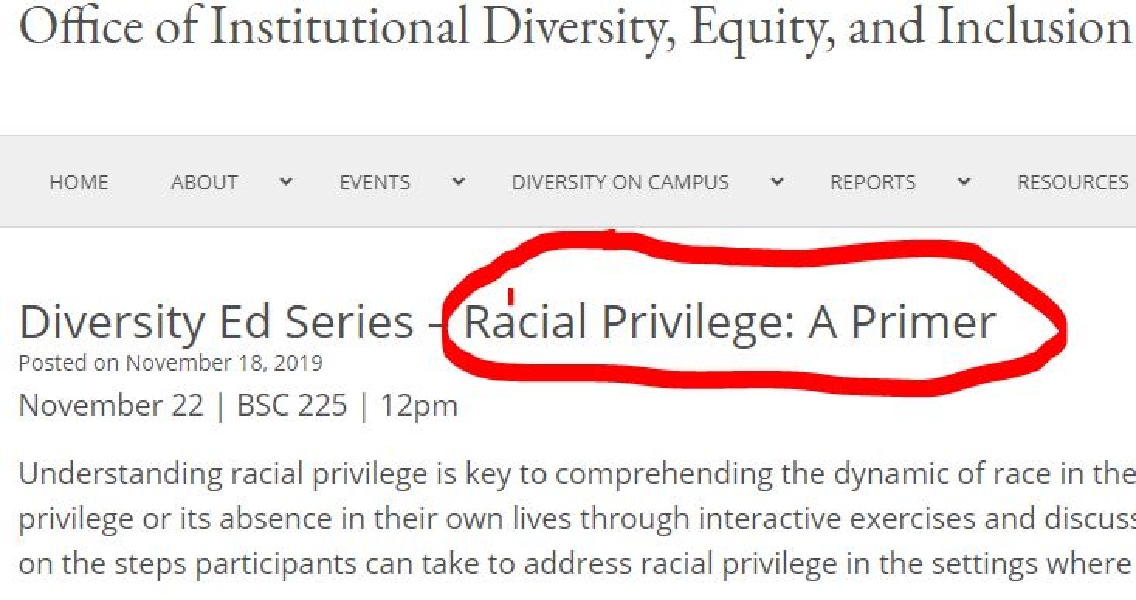 A New Jersey college hosted a diversity workshop for students and faculty that asked participants to explore their “racial privilege” as part of its “Diversity Education Series” on campus.

The College of New Jersey's Office of Institutional Diversity, Equity, and Inclusion hosted an event called “Racial Privilege: A Primer” during which, according to The Signal student newspaper, participants were told to “put on their racial clothing” to explore the effects of racial privilege.

Students also discussed their feelings of privilege in a group after the activity, with the goal of understanding what privilege meant to students who were white and to those of color.

Cynthia Fulford, assistant director of the Support for Teacher Education program at TCNJ told Campus Reform in an email, “The invisible privileges afforded to a group allow them to believe they get ahead based solely on working hard and doing the right things.”

Fulford also commented that a number of obstacles, citing education, employment, and homeownership, “hinder hardworking people of color," and that many white attendees  said how it was “an eye-opener to them."

“The invisible privileges afforded to a group allow them to believe they get ahead based solely on working hard and doing the right things.”

Fulford also suggested to Campus Reform that “ If you don't have a balanced view from someone else in the room who isn't black, then you may be unintentionally skewing the power and need [for the] article.”

Robin Parker and Pamela Chambers of the Beyond Diversity Resource Center and TCNJ’s interim director of Diversity and Inclusion Marvin A. Carter helped moderate the discussion of white privilege during the event.

Campus Reform reached out to Director Carter and the Beyond Diversity Research Center about the event but did not receive a response in time for publication.

“This fall the college held a series of five workshops exploring race and its implications, of which 'Racial Privilege: A Primer,' was one,” Luke Sacks, TCNJ’s Head Media Relations Officer, told Campus Reform in an email inquiry about the event.

“Inclusion, respect, and tolerance are core values of the institution.”

The college also stated that they will “continue to offer programming that is consistent with its mission and values.”