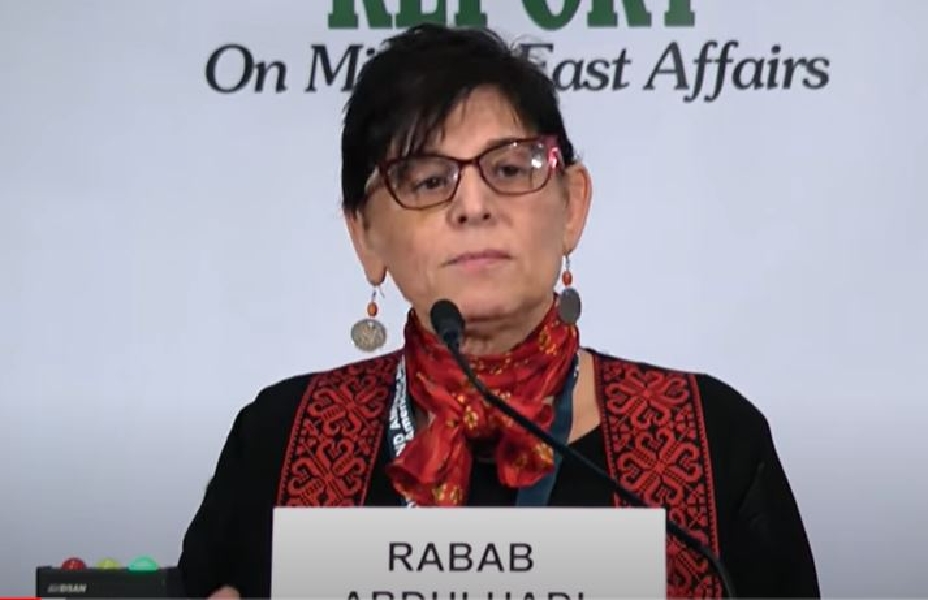 The American Association of University Professors presented one of its coveted awards to honor the activism of a professor who called Zionists “white supremacists” and spent taxpayer money to meet with convicted terrorists.

Professor Rabab Abdulhadi, San Francisco State University’s director of Arab and Muslim Ethnicities and Diasporas Initiative (AMED), received AAUP's "Georgina M. Smith Award," as part of the 2020 list of "Outstanding Faculty Activists." According to AAUP, this award is given to "a person or persons who provided exceptional leadership in a given year in improving the status of academic women or in academic collective bargaining and through that work improved the profession in general."

In its recognition of Abdulhadi, the AAUP praised her for exemplifying “courage, persistence, political foresight, and concern for human rights." The group highlighted her efforts to "advance the agenda for social change in Palestine, the United States, and internationally."

Campus Reform reported on Abdulhadi in 2014, when she led a taxpayer-funded university trip to meet with at least two convicted terrorists. One was the first female airplane hijacker and a member of the Popular Front for the Liberation of Palestine (PFLP). The second convict that Abdulhadi brought students to visit led the northern branch of the Islamic Movement in Israel and allegedly espoused the conspiracy theory that Jewish people have used the blood of European children to make “the dough of the holy bread.”

But the AAUP praises Abdullhadi saying that her “leadership transcends the division between scholarship and activism that encumbers traditional university life,” and that “her commitment to global scholarship that builds mutual understanding is evident in the collaborations she has initiated.”

Abdulhadi also worked to forge ties between SFSU and two Hamas-affiliated Palestinian Universities, according to the Middle East Forum and AMCHA. SFSU’s AMED Studies department also sang Abdulhadi’s praises, announcing on its Facebook page that it nominated her for the award because she “inspires an advocacy campaign against the increased influence of Zionism over academic institutions and policies in the U.S.”

Abdulhadi reiterated these claims in her own Facebook post, calling her award “indicative” of the “rejection of Zionist ownership of Jewishness and right-wing hate speech, smearing, bullying, and intimidation,” among other things.

Abdulhadi is currently the focus of a federal Title VI complaint against UCLA, which Campus Reform covered in October 2019. According to the complaint, Abdulhadi harassed and “berated” a Jewish student who was required to attend her lecture there. The complaint alleges that Abdulhadi called Zionists and white supremacists “birds of a feather,” and that she stated those who support Israel want to ethnically cleanse the Middle East.

The student accused Abdulhadi of stating that Israel and the U.S. have “shared values” of “killing people, colonialism and white supremacy.”

Her alleged remarks were similar to remarks she had made a year prior in a post on the AMED department Facebook page, where she wrote that Zionists should not be welcomed on her campus. Abdulhadi was responding to a statement from SFSU President Leslie Wong who had previously expressed the similar controversial sentiments but publicly apologized for it later -- incurring a sharp rebuke from Abdulhadi.

“Let me be clear: Zionists are welcome on our campus,” Wong wrote in her apology.

“I consider the statement below from President Wong, welcoming Zionists to campus, equating Jewishness with Zionism, and giving Hillel ownership of campus Jewishness, to be a declaration of war against Arabs, Muslims, Palestinians,”  Abdulhadi wrote on the official department Facebook page.

This includes our sisters and brothers in the Jewish community whose conscience refuses to allow Israel’s colonialism, racism, and occupation — the inherent character of  Zionism — to speak in their name.”

Abdulhadi’s response was posted directly under a cartoon image she also posted which carried the words “I am anti-Zionist. I’m NOT anti-Jew.” In the post, she demanded that the president retract what she called a “racist, Islamaphobic, and colonialist statement,” and accused the president of “catering” to “donor pressures and the Israeli lobby.”

“How exactly does such divisiveness and dogmatism foster ‘mutual understanding'?" questioned Committee for Accuracy in Middle East Reporting in America Campus representative Zac Schildcrout, during an interview with Campus Reform.

Professor Miriam Elman, the executive director of the Academic Engagement Network (AEN), told Campus Reform it was “astonishing,” that the AAUP would issue any award to someone with a “history of demoralizing Jewish students- the majority of whom view Zionism as a central component of their identities.”

“The fact that she’s tried so hard to suppress the rights of Jewish and Zionist students to free expression and to full participation in campus life should’ve been a disqualifier for this award,” Elman told Campus Reform.

Former AAUP President and Professor Cary Nelson told Campus Reform that he “would have condemned” Abdulhadi’s “deplorable honor,” calling it a “reward for promoting hatred and discrimination.”

“But I did not have the power to stop it. I would have had one vote,” said Nelson.

Nelson added that the award “reflects the significant number of fierce anti-Zionists in AAUP leadership positions and the organization’s increasing willingness to politicize its identity and social role.”

In a Twitter thread criticizing the AAUP, American-Israeli Philosopher Judea Pearl questioned the group's tax-exempt status and called its praise of Abdulhadi a “POLITICAL statement meant to encourage such activities in the future.”

“I don’t believe such corruption would last one day had members and donors of @AAUP known what is done in their name,” he added.

I don't believe such corruption would last one day had members and donors of @AAUP known what is done in their name. I therefore retweet it to readers, in case some are still members in this hijacked organization, so called "American Association of University Professors". https://t.co/j4yDwfnmAO

As part of its mission, the AAUP states that it aims to “advance academic freedom and shared governance,” to “define fundamental professional values and standards for higher education” and to “promote the economic security of faculty, academic professionals.”

“AAUP members who violate fundamental values and standards in higher education, which the AAUP is committed to advancing, shouldn’t be winning its awards or admiration,” Elman told Campus Reform.

Campus Reform reached out to the AAUP multiple times for comment but did not receive a response in time for publication.