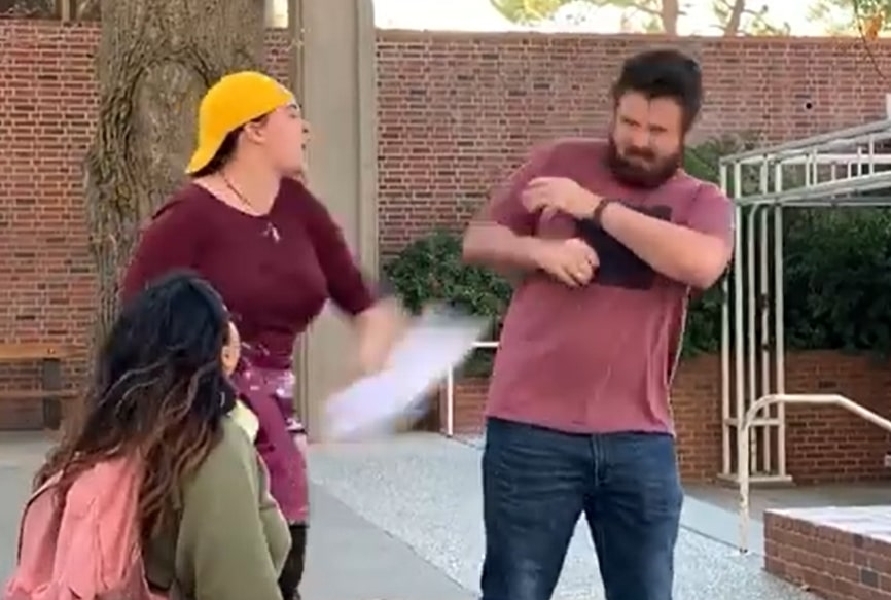 Police have issued an arrest warrant for a California student who allegedly attacked a conservative student while he held a sign that read “All Lives Matter” in November.

In November 2019, a student at California State University-Chico was caught on video attacking Campus Reform Correspondent Michael Curry. While the altercation was at first peaceful, things took a violent turn when the student began shouting at Curry to “get the fuck out of my fucking space,” tearing Curry’s paper and hitting him with it.

“There is no doubt in my mind that if the situation was reversed I would have been expelled..."

Now, the student is facing a battery charge.

Campus Reform recently spoke to Curry as he recalled the moments leading up to the incident.

“She was seen screaming at people passing by saying people should ‘Kill the GOP’ and that Republicans want all black and trans people dead,” Curry recounted in an interview with Campus Reform. “She held a sign that said ‘Black Trans Lives Matter’ and I stood with a sign that said ‘All Lives Matter’,“ he added.

“She started yelling at people, saying that Republicans want to kill all trans people [and] all black people and that we wanted to kill anybody who wasn’t a straight white man ... In reality, most of the people we have tabling with us were not straight white men. We have a hugely diverse club," said Curry.

“I stood up there and held the sign. I didn’t say anything, I didn’t look at her … She started yelling at me, accusing me of harassing her … She actually grabbed my sign and struck me with it.”

Curry said that the student then called the police, and even demanded an ambulance be dispatched after she had a panic attack, claiming she had been "triggered." The ambulance then came and took her away.

“After the video cuts out, [Ledet] actually walks over to the side and called the police herself. Some people who dealt with the dispatch call [said that] she called saying I ‘triggered’ her … She started screaming on the side, lying down on the ground screaming. The cops came … she actually demanded an ambulance to take her away.”

Now, there has been a confirmed warrant for her arrest issued by the Butte County District Attorney’s office.

The charge is listed as a misdemeanor battery.

Curry told Campus Reform he is glad that she is finally being held accountable for her actions.

“I am glad there will be some level of accountability for the actions of this violent individual,” Curry said in an email. “It is my experience that the school does not deem it necessary to hold leftist students accountable when they physically attack conservatives students.”

Curry is confident that if the roles were reversed, he would have been kicked off-campus.

“There is no doubt in my mind that if the situation was reversed I would have been expelled, rightfully so … This behavior needs more than just discouragement, it needs to be punished. As long as the university continues to sweep issues like this under the radar, conservative students will never feel safe.”

Chico State spokesman Sean Murphy told Campus Reform that the university is taking disciplinary action for the situations that have occurred.

“The university has zero-tolerance for taunting, harassing, and of course, any threats and/or physical violence,” assured Murphy.

“Students in violation of the Standards for Student Conduct may be subject to University disciplinary action — and students are already being disciplined" for the events,” Murphy added.

Murphy would not provide a comment on the arrest warrant specifically but said that any law violations will be handled appropriately.

Additionally, violations of local, state, or federal laws will be dealt with by the appropriate agency,” adding that “free speech” is “always secondary to safety.”

Campus Reform reached out to the California Faculty Association for comment, which did not respond in time for publication.