In the posts, the professor joked about Congresswoman Alexandria Ocasio-Cortez’s intellect and posed questions about crime statistics for different racial groups.

The University of Colorado-Boulder is "reviewing" a professor for his social media posts after the local Democratic Party encouraged its followers to report him. 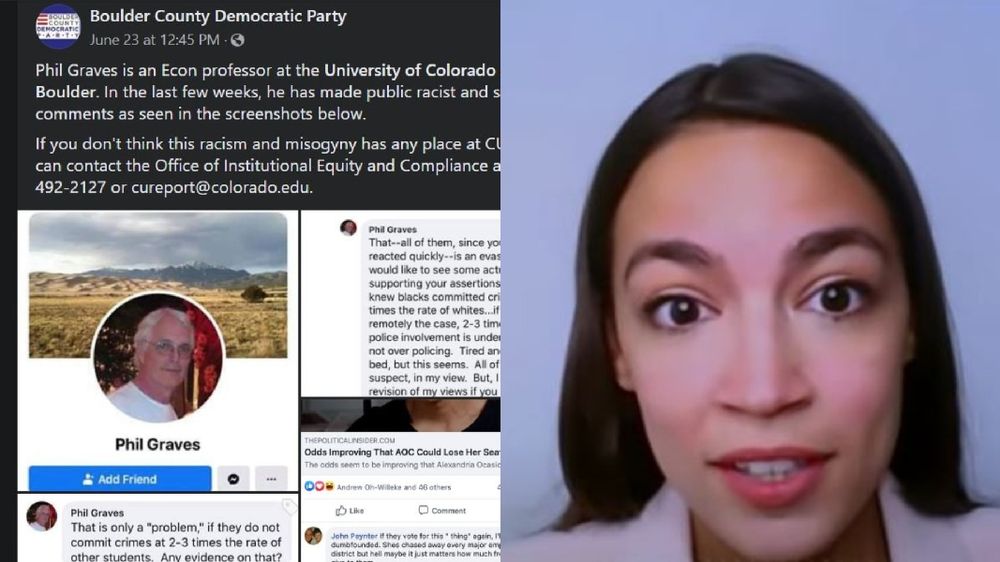 A professor at the University of Colorado-Boulder is under review for comments he made about Rep. Alexandria Ocasio-Cortez (D-N.Y.) and for posing questions about crime rates for specific racial groups on Facebook.

According to the Denver Post, Professor Phil Graves, who teaches economics, commented on a post in a private Facebook group titled, Boulder Collective. Graves responded to a post of an article from the website the Boulder Daily Camera, which mentioned data showing local school district students of color are more frequently referred to the police than their white peers.

“That is only a ‘problem’ if they do not commit crimes at 2-3 times the rate of other students. Any evidence of that?” Graves asked in the comment section.

Katie Kelly, who started the post, responded to Graves asking whether he needed more evidence to show black and Hispanic students were “less criminal than white people.”

For those comments, Graves was accused of making "racist" comments by the Boulder County Democratic Party. The group urged its followers on Facebook to report Graves to UC Boulder for the remarks.

The Boulder County Democratic Party highlighted another remark Graves made about AOC, which the party says was a “sexist” comment.

“I actually think she is pretty ‘hot,’” Graves wrote about the New York congresswoman. “If she were just a normal bartender, I would probably be interested! But, she is not as bright as most bartenders and far too convinced that her opinions actually ‘matter.’”

UC-Boulder spokeswoman Deborah Mendez Wilson told the Denver Post that Graves’ posts were reported to the university’s Office of Institutional Equity and Compliance.

“This is the university’s first step in reviewing the facts and determining what actions can be taken, including investigating allegations of harassing behavior toward individuals based on multiple protected classes,” Mendez Wilson said. “As Chancellor (Phil) DiStefano has underscored in the recent past, discrimination and harassment have no place at CU Boulder.”

Graves said that while his posts may have been in “tasteless,” he is not racist or sexist.

“I am neither sexist nor racist, but sometimes (if you scroll through my posts) I have been known to be a tad ‘tasteless.’” Graves told the Daily Camera in an email. “But, of course, ‘popular speech’ has never needed the 1st Amendment … it is only unpopular speech that needs that protection.”

“I think that could potentially have an impact on the students he’s teaching,” Mercuri said. “It’s frustrating to see that anyone feels the way he does, and I felt alarmed that he was a tenured professor at CU and that he felt OK saying something like that in public.”