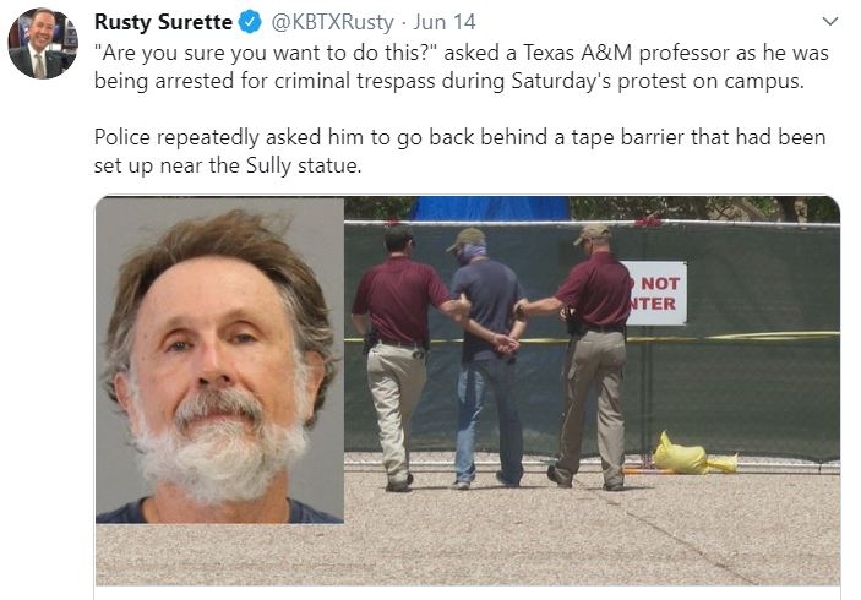 A socialist group at Texas A&M University launched a public fundraising campaign on Venmo to raise bail for an arrested professor. In doing so, the socialist club appears to have violated the university's rules, which impose certain restrictions on how they can fundraise.

Texas A&M associate professor Michael Alvard was arrested for criminal trespassing during a protest in favor of removing a statue of a former university president. Details of the statue controversy and the arrest were previously reported by Campus Reform.

The Young Democratic Socialists of America at Texas A&M is an officially recognized club at Texas A&M. Following Alvard’s arrest, YDSA promoted a campaign seeking donations to its Venmo account  for “bail.”

The use of a Venmo account by a student organization to collect donations is in strict violation of Texas A&M finance rules.

The Student Organization Finance Center lays out clear rules against student organizations receiving money via Venmo, “a digital wallet that lets you make and share payments with friends.” Page 55 of the Instructional Guide for student organizations at Texas A&M states, “Popular social and online payment methods such as Venmo and Paypal are not permitted. These services must be associated with personal banking accounts and thus violate TAMU Student Rule 41.1.3.”

All proceeds and donations obtained by student organizations must be processed with the SOFC. Student Rule 41.1.3 states that "all funds must be deposited no later than the next business day after collection. The organization’s advisor must approve and sign each expenditure before payment."

On the same day of the demonstration, YDSA announced in a tweet that it reached its goal of $3,000 in bail funds. All excess funds would be donated to The Bail Project, which describes itself as "a non-profit organization designed to combat mass incarceration by disrupting the money bail system ‒ one person at a time."

“Although Venmo is a popular and accessible option for many individuals, it is not an approved method of fundraising for most of our student organizations due to the logistics of fund collection and accounting through that platform that may not align with student organization financial policies and protocols,” assistant director of the SOFC Tyler Sellers told Campus Reform.

When asked if there will be consequences for the YDSA group, Sellers answered, “Anytime we are made aware of the possible use of this or other unapproved fundraising platforms by one of our student organizations, we follow up directly with the organization and take steps to ensure compliance with our Student Rules and policies.”

Texas A&M Student Senator and member of the Finance Committee Dylan Bohn told Campus Reform that this matter “definitely needs to be looked into.”  When asked if he has ever asked the SOFC about setting up a Venmo account for his organization, Turning Point USA, Texas A&M senior Brendan Cassell told Campus Reform, “I have not. It’s in the rules, you just can’t do it.”

Texas A&M YDSA did not respond to Campus Reform’s request for comment.