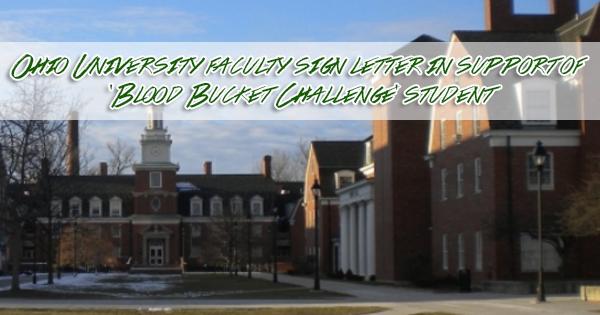 Almost 50 faculty members at Ohio University have signed an open letter publicly supporting the student who gained national media attention when she turned the ALS Ice Bucket Challenge into a bloody political statement.

As Campus Reform reported last week, student senate president Megan Marzec filmed herself accepting the viral activism challenge, but instead of dumping a bucket of cold ice water over her head—as the challenge calls for—she dumped what she called a “bucket of [Palestinian] blood” over her head and called for OU to divest from Israel.

"We also affirm that her method of expression is a legitimate form of protest and strategy to call on others to take up the issue for debate."

Since then, the student senate has issued an apology for Marzec’s video, and the university has distanced itself from her statement, saying that it is “not an institutional position or a belief held by [OU] President [Roderick J.] McDavis.”

“We are also disappointed in OU administrators and community members who have criticized her act but have not publicly defended her against this violent response,” they wrote Wednesday.

The letter defends Marzec’s “blood bucket” video in which she says the blood “symbolizes the thousands of displaced and murdered Palestinians, atrocities which OU is directly complacent in through cultural and economic support of the Israeli state.”

“Without advocating a particular position on the Israel-Palestine issue — we hold diverse opinions on this question — we nevertheless staunchly affirm Marzec’s right to express her views,” the letter says. “We also affirm that her method of expression is a legitimate form of protest and strategy to call on others to take up the issue for debate.”

Dr. Loren D. Lybarger, associate professor of classics and world religions, affirmed that he signed the open letter because he strongly believes in Marzec’s right to freedom of expression.

“Her status as student president did not cancel her right to speak and act on behalf of particular issues,” Lybarger told Campus Reform. “It might have led to tensions with members of student senate who disagreed with her but her status did not invalidate the right to express her views and to act in the way she did.”

“How are we to define which acts are civil and uncivil? By what measure? Who gets to do the measuring, according to which standards? What does it mean for institutional leaders to invoke the term, say, in firing a professor [Prof. Steven Salaita at University of Illinois at Urbana-Champaign] or implying the illegitimacy of a student’s political action (OU),” Lybarger wrote in his email to Campus Reform.

Dylan Gustafson, an OU student, called into question Marzec’s own civility, especially when she stood on top of a table at a recent student senate meeting and called members of OU’s Bobcats for Israel “fascists.” Marzec had campus police handcuff and arrest four pro-Israel students while they were attempting to speak during the open floor portion of the meeting.

Before she was arrested, Rebecca Sebo, president of OU’s Bobcats for Israel student group, condemned anyone who encouraged violence against Marzec, but still asked for her resignation as student senate president.

Lybarger refused to comment on whether or not the students should have been able to continue speaking instead of Marzec calling for campus police to arrest them as he has only heard about the incident from what he has “read in the media.”

“I don’t know how you or the rest of the body could have handled it any better,” The Post Athens quoted Hall-Jones as saying.

Hall-Jones did not respond to Campus Reform’s request for comment.

The university itself has not commented on the arrests of the students, except to direct reporters, including Campus Reform, to the statement on OU’s campus police department’s Twitter page. In an email to all students sent on Friday, OU’s president reiterated the university’s commitment to free speech and civility.

“We do not support an environment in which students—and even some faculty and staff—feel uncomfortable expressing their ideas and viewpoints,” the email, obtained by Campus Reform, reads. “To this end, we will make every effort to support a safe forum for open discourse and education on the complex issues of our time.”

According to the OU police department, no “imminent threats of death” towards Marzec have been communicated to them.

“Because OHIO [sic] is a state university, we have our own police department. OUPD has been involved in this case from the beginning, and as of today, no explicit, credible or imminent threats of death toward Megan or anyone else have been shared with the police department,” they said in a statement emailed to Campus Reform.

“OUPD has taken several reports that could be described as disturbing and possibly a violation of the telecommunications harassment statute, and officers have followed up accordingly. In some cases, officers have worked with agencies out of state to interview suspects and assess potential threats. They continue to encourage Megan, and anyone else receiving disturbing communications, to share them with the police. Proactively, OUPD is working with intelligence gathering partners at the state level to continuously monitor the situation for any emerging threats to the campus or anyone connected with it. So far, no such threats have been identified.”