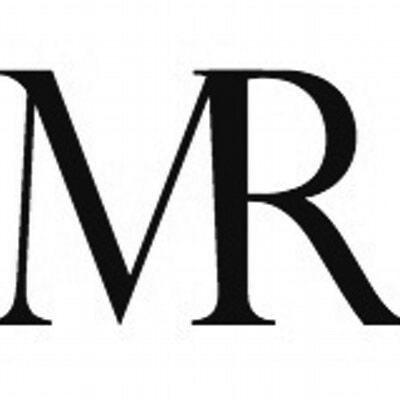 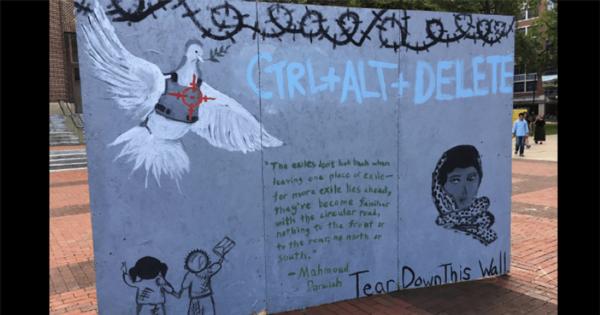 Pro-Palestinian students at the University of Michigan erected an “apartheid wall” on Rosh Hashanah, the Jewish New Year, and harassed passersby with Anti-Israel slogans.

Members of Students Allied for Freedom and Equality (SAFE), the group that erected the display for Palestine Awareness Month, manned the cardboard wall dressed as Israeli Defense Forces (IDF) checkpoint guards, a reference to the security fence at the border between Israel and the West Bank.

“We felt ostracized and excluded as many of us sat in synagogue, unable to share our stories.”

Israel constructed the fence as a result of the Palestinian suicide bombings and other terrorist attacks against Israel that resulted in the deaths of nearly 1,000 people. Slogans written on the mock border wall expressed Palestinian disapproval of the security fence and called for its removal.

Jewish students and others who support Israel were deeply offended by the protestors and the fact that a student group was permitted to install this so called “apartheid wall” on one of the holiest days of the year for those who practice Judaism, and at one of the most visible spots on campus, no less. 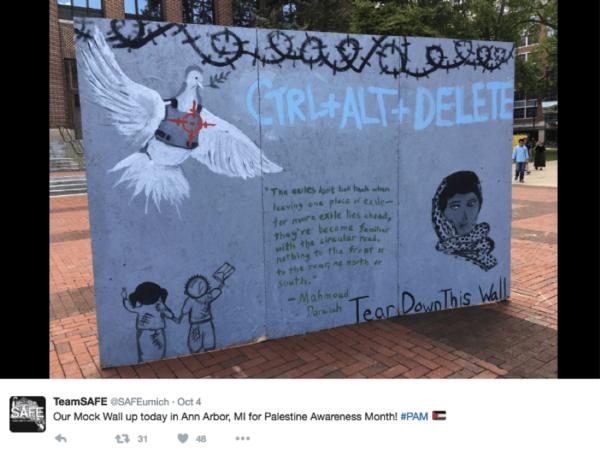 Because Rosh Hashanah calls for attending service at the synagogue, many Jewish students were not on campus to express their feelings of anguish while the event was occurring, leaving those who remained on campus to cope without the support of many of their peers.

Not only was the wall upsetting in itself, but Michigan students felt that those dressed as IDF Checkpoint Guards were mocking Israeli culture and arguably engaging in the sort of cultural appropriation for which other students are routinely castigated.

A group of particularly anguished students from the university even authored a petition addressed to University President Mark Schlissel.

“Just last week, you sent a message to the student body emphatically stating that ‘behavior that seeks to intentionally cause pain to members of our community is reprehensible,’” they remind Schlissel, referring to a message that the president issued last week concerning racially offensive fliers that were found around campus.

“We speak on behalf of many students in the Jewish and pro-Israel campus communities when we write that yesterday we felt ostracized and excluded as many of us sat in synagogue, unable to share our stories,” the students continue.

The students asked President Schlissel to issue a statement in support of Jewish and pro-Israel students, similar to the statement he released last week in support of African American students who were offended by the fliers found on campus.

Student Jesse Arm was particularly taken aback by the University’s treatment of the “apartheid” wall.

“The hypocrisy of a university that will bend over backwards to accommodate the emotional distress experienced by certain religious, ethnic, political, sexual, and racial groups but not others is wildly offensive,” said Arm. “So long as I go to a university where ‘safe spaces,’ ‘trigger warnings,’ and ‘expecting respect,’ are the norm, I demand that all communities be held to the same standard.”

Schlissel will be speaking tomorrow at the Power Center on campus to formally introduce the Diversity, Equity, & Inclusion Strategic Plan. The University’s diversity website describes this plan as an attempt at “creating a vibrant, diverse, and inclusive campus in which every individual has the opportunity to be heard, to contribute and to excel.”

In order to construct the wall on the Diag, SAFE would have had to receive permission from the university, suggesting that administrators initially saw no problem with this wall intended to honor Palestine Awareness Month.

3 Articles by The Michigan Review