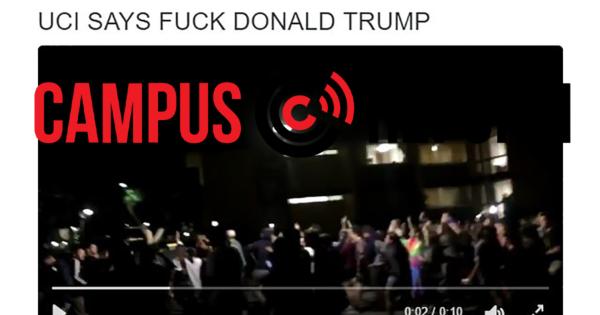 Hundreds of students at the University of California, Irvine took to the streets in the middle of the night to protest Trump’s decisive victory in the 2016 Presidential election.

After Secretary Clinton conceded the election to Donald Trump, more than 300 students marched through campus chanting “Fuck Donald Trump,” among other things, and UC Irvine Riot Police were eventually called in to maintain order among the rowdy protesters.

“I can say with certainty that if Hillary Clinton won...students would not be out rioting in the streets.”

Video footage obtained by Campus Reform shows hundreds of students—many of them visibly shaken as a result of the Trump victory—angrily protesting against both Trump and the Republican Party during a demonstration that lasted for over two hours.

UC Irvine students also organized a “Group cry” at the library Wednesday evening in support of socialist Bernie Sanders. Students on the Facebook event page expressed “solidarity” with “marginalized communities” and blamed the GOP for the nation’s problems.

One student on the page even warned protesters against chanting “Dump Trump,” as it could scare people of color and LGBT folks, while others lamented that they are “no longer safe” in America as a result of the election. 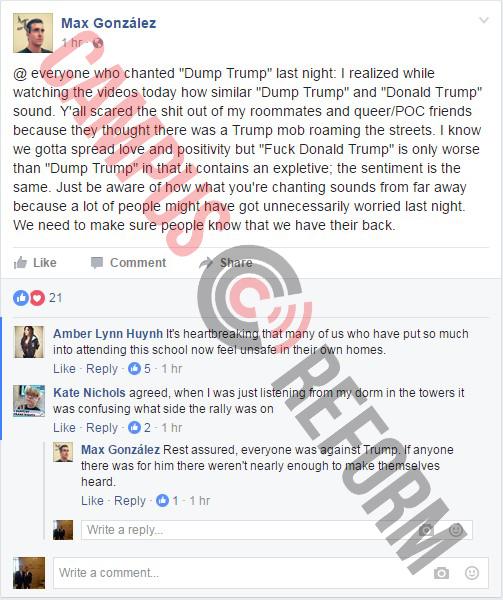 Students are currently organizing several more campus protests against Trump, and have even created “UCI Hates Trump” shirts, but at least some of their classmates are abstaining from the festivities while silently thrilling to the electoral outcome that prompted them.

[RELATED: American flag desecrated with 'f*** you' to Trump]

“I think the protesters have a right to protest, but they need to respect the fact that Donald Trump is now the President of the United States,” UC Irvine student Koosha Azartash told Campus Reform. “I can say with certainty that if Hillary Clinton won, pro-Trump students would not be out rioting in the streets. We need to unify as a country and work to fix the problems we face as a nation.”