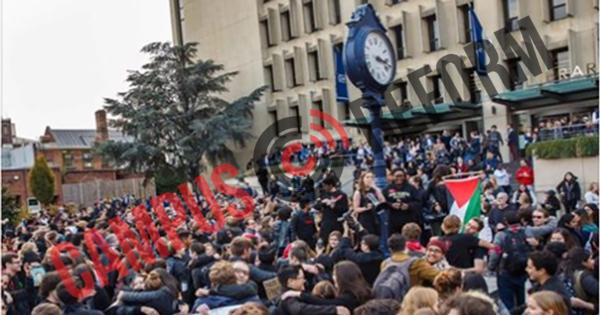 George Washington University students marched to the White House Tuesday to protest Donald Trump’s election and issue demands such as making GW a “sanctuary campus” and minimizing the role of campus police.

Students walked out of class Tuesday and met in Kogan Plaza for a short rally prior to the White House march, where various students explained why they are opposed to a Trump presidency, after which they released a list of 15 demands compiled by 12 student organizations, including The Feminist Student Union, Progressive Student Union, and Students for Justice in Palestine.

“What about Republicans? The student body has made it very clear that we aren’t welcome here.”

“There are many other women, men, and individuals out there who also identify as transgender and are literally scared for their lives,” one student claimed during the rally. “We don’t know what’s going to come from this, but I definitely know that something is going to happen.”

The protesters marched to the White House and then looped back around to GW’s campus with the aid of a police escort, shutting down traffic in one direction on Pennsylvania Avenue and Washington Circle in the process.

The students nevertheless criticized police officers as being part of a “racist, hetero-patriarchal, heterosexist system,” and wrote in their demands that students need to be protected from the police.

“Placing us in these officers’ care is an act of violence, especially for Black students,” one demand stated. “The safety of the University’s students must be priority.”

The ultimatum was eventually delivered to Dean of Student Affairs Peter Konkwerski, but GW has yet to issue an official response to the demands. 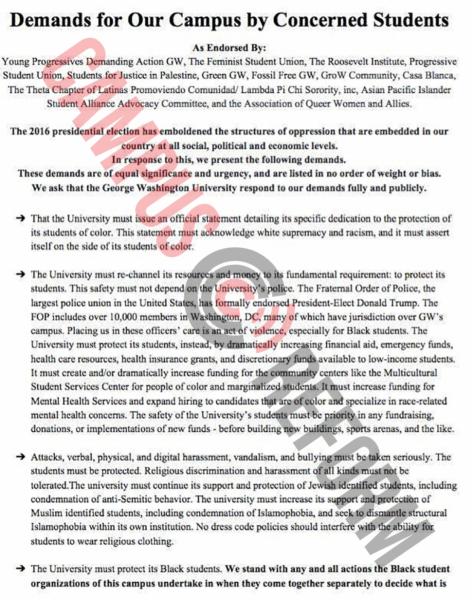 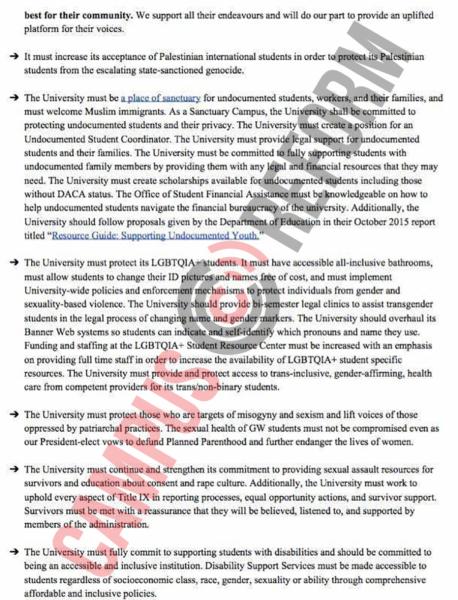 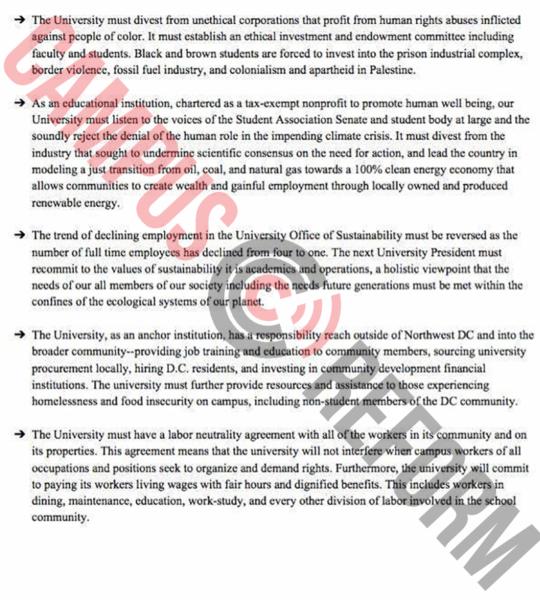 In conjunction with over 100 schools across the country, the student organizations demanded that GW become a sanctuary campus, meaning university officials would not comply with Immigrations and Custom Enforcement (ICE) officials, and would provide legal and financial resources to illegal immigrant students.

The document then goes on to demand GW alter its admissions guidelines, calling on the school to “increase its acceptance of Palestinian international students in order to protect its Palestinian students from the escalating state-sanctioned genocide,” and declaring that it “must welcome Muslim immigrants,” as well.

Other items on the list urge GW to “acknowledge white supremacy and racism” and “assert itself on the side of its students of color.”

Transgender students are also represented in the document, which stipulates that GW “must have accessible all-inclusive bathrooms...and allow students to change their ID pictures and names free of cost,” as well as “provide bi-semester legal clinics to assist transgender students in the legal process of changing name and gender markers.”

Although the administration did not respond to the delivery of the demands on Tuesday evening, the official GW Facebook and Twitter accounts posted a photo of the protest with the caption “‘No hate, no fear. Everyone is welcome here,’” borrowing a chant used during the march. 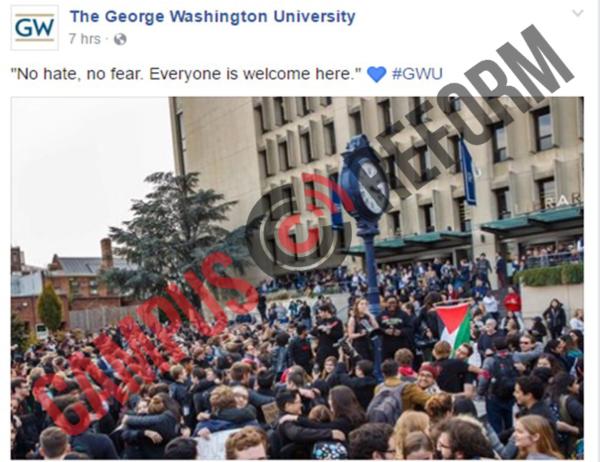 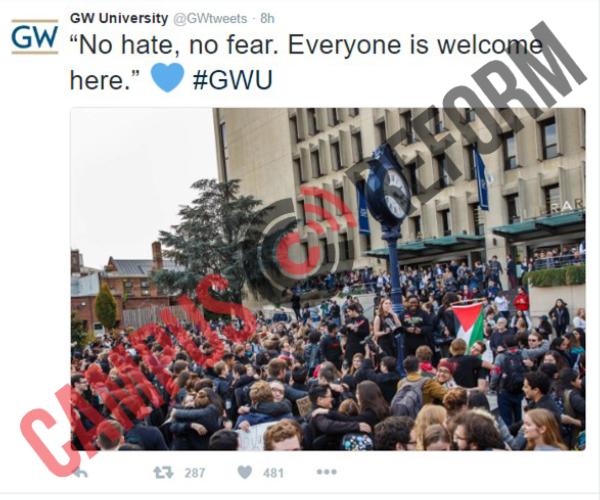 Angry students and alumni bombarded the university’s Facebook post, with one stating “Don’t take sides GW, you have loyal students on both sides of the spectrum,” and another asking, “What about Republicans? The student body has made it very clear that we aren’t welcome here.”

The GW Young America's Foundation (YAF) chapter also weighed in on the protest, releasing a statement that was shared on the event page with the intent of firing up the student activists.

“The cries of ‘not my president’ and vitriolic marches and riots against the next properly-elected president are antithetical to our Republic’s fundamental commitment to the peaceful transition of power,” the group declared. “We strongly oppose this walkout and those students abandoning their educations and disrespecting their peers and professors in order to lash out against the will of the country.”

Calling the protesters’ list of demands “radically absurd and profoundly divisive,” YAF expressed hope that “the university will stand against this radical list of demands and will affirm its commitment to meaningful diversity—a diversity of viewpoints and ideas where we can passionately disagree and yet engage civilly and respectfully.”

Campus Reform reached out to GW for a statement responding to the protest march, but had not received a response by press time.