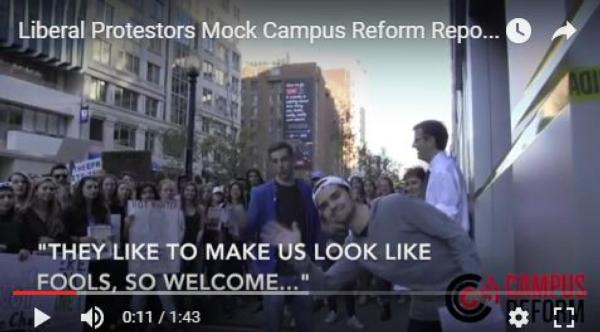 A professor at Georgetown University organized his students to sign a petition and participate in a protest against Myron Ebell, Donald Trump’s expected pick to lead the EPA.

Georgetown students gathered on campus Friday afternoon to march to Ebell’s office in downtown Washington, D.C. at the direction of a student group called Students for Climate Security and GU professor Andrew Bennett, who claims he has not been to a protest in “35 years” but felt obligated to “keep America safe from climate degradation.”

“I don’t usually use this email list for political purposes, but we are not in usual times.”

“These are not normal times,” Bennett writes in a piece for Medium. “The New York Times has reported that Trump appointed a climate denier funded by the coal industry to be his top environmental adviser.”

Flyers distributed at the march further outlined Bennett’s role in the protest as the introductory speaker and explained that he would be providing “protest logistics.” 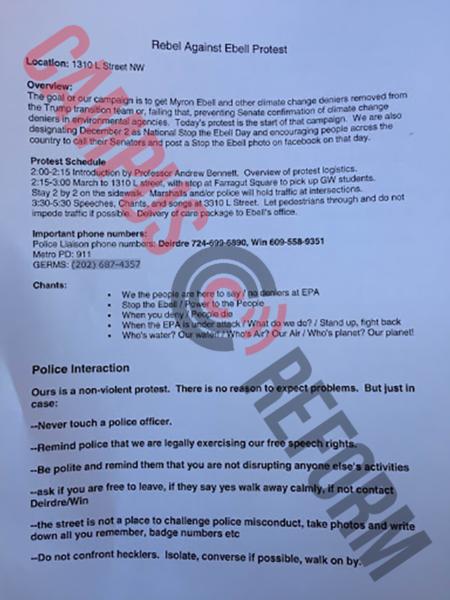 A student in Bennett’s Comparative Political Systems (CPS) class, who wishes to remain anonymous, told Campus Reform that he showed up to the protest briefly because he felt his absence would be “noticeable” and hoped that participating would ingratiate him with Bennett.

The student also provided emails to Campus Reform showing that Bennett not only recruited students in the class to help plan and participate in the protest, but even discussed the event during class time.

“I am writing to follow up on our discussion the other day,” Bennett wrote in the email, saying, “I have come up with a plan of action on which I can use your help if you are interested.”

Notably, he even indicated that he was aware that sending the message could be problematic, writing that “I don’t usually use this email list for political purposes, but we are not in usual times, so please forgive the email intrusion.” 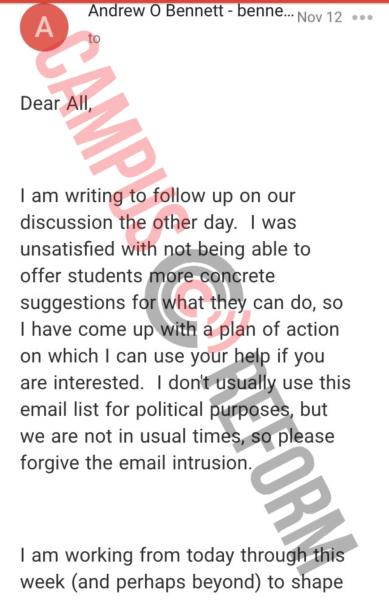 Bennett announced that he would be working to “shape the debate on climate change policy” and would need help from his students with everything from “research, to media outreach, to art,” and encouraged interested students to reach out to his son, Jack Bennett, a senior at GU. 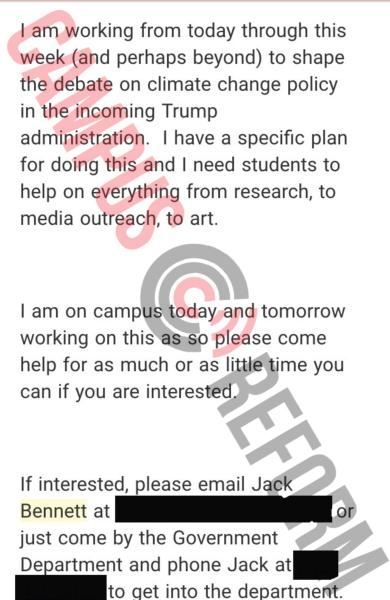 Prof. Bennett told Campus Reform in an email that there was “no extra credit” given to students for the event, but acknowledged that he did advertise the protest to his class.

Georgetown students merged with George Washington University students midway through the march and, according to a video on the Facebook event page, blocked at least one side of the street to make their way downtown to the Competitive Enterprise Institute, where Ebell is the Director of the Center for Energy and Environment.

When dealing with the media, the flyer encouraged protesters to “remind them that over 97% of scientists believe in climate change” and “make it clear that this is a nonpartisan issue.” 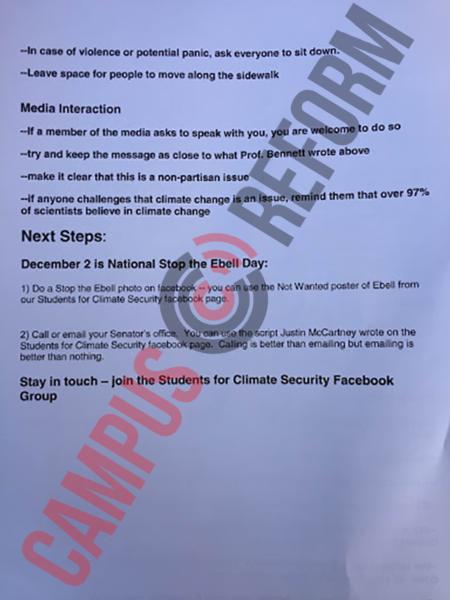 However, protesters refused to speak with Campus Reform, calling CRO a “far-right group that posts viral videos to make fun of college students.”

“They like to make us look like fools,” Jack Bennett said, while another student volunteered that “we’ve got plenty of material here for you, hope you enjoy.”

Past the protest, students were encouraged to sign a petition against Ebell’s appointment, which, according to a post on Facebook by one of the protest organizers, had already been signed by at least 100 Georgetown professors.