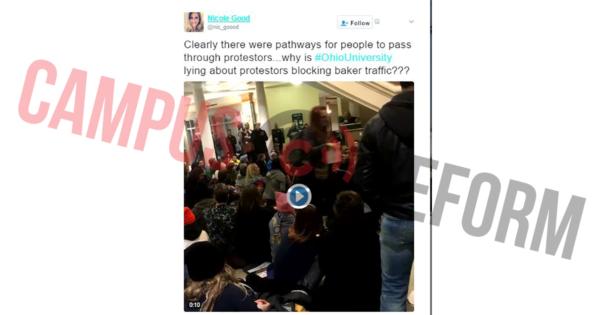 Approximately 70 people were arrested at Ohio University Wednesday evening after staging a sit-in in support of making the school a sanctuary campus.

Protesters sat-in at the Baker University Center for several hours before police officers informed them they had to leave. A little under an hour later, the remaining protesters were arrested and charged with criminal trespassing, reports The Athens News.

“Clearly there were pathways...why is [OU] lying about protestors [sic] blocking baker traffic???”

The protest started in front of the Athens County Courthouse with about 300 people and eventually marched on the Baker Center, where approximately 150 people participated in chants and held signs reading “Make Racists Afraid Again” and “Trump is a Nazi.”

The OU Student Union said that they would continue their sit-in until the university met their list of three demands, including making the school a sanctuary campus for illegal immigrants and including “immigration status” as a protected class under OU’s discrimination policy.

[RELATED: OU Student Union: 'Trump does not deserve our respect']

Officers warned protesters they would have to leave because they were blocking the entrances and exits, but many refused to relocate and were subsequently arrested.

OU’s media relations office released a statement shortly after the arrests were made:

“Protestors were informed repeatedly that they were impacting operations, egress, and creating a safety issue," OU spokesperson Carly Glick said. "At approximately 7:22 p.m. OUPD Chief Andrew Powers delivered his first warning that anyone refusing to leave would be arrested within the hour. They were given ample opportunity and time to relocate, and at 7:58 p.m. OUPD began arresting anyone who refused to leave. Approximately 70 protesters were arrested and charged with criminal trespass.”

OU Police Chief Andrew Powers told The Athens News that the sit-in presented a public safety hazard, explaining that “if there had been an emergency in the building it could have been chaos in here.”

He also noted that he offered protesters a meeting space, but had refused to relocate.

Nonetheless, many students were unhappy with the arrests, drawing on their fire safety expertise to assert that they had left a large enough walkway to negate the potential safety hazards of the sit-in.

“Clearly there were pathways for people to pass through protestors...why is #OhioUniversity lying about protestors [sic] blocking [B]aker traffic???” one student tweeted, including a video of the protest.

“This is completely disgraceful. ‘Impacting operations’? These students were occupying their own student center,” a commenter wrote in response to the school’s statement on Facebook. “Listen to the demands of the students and protect those who are most vulnerable. Shame on you.”

The Ohio Student Union has not announced if they plan to resume the protest in the wake of the arrests made Wednesday night.