Will Rierson North Carolina Campus Correspondent @RiersonNC on Feb 17, 2017 at 10:21 AM EDT 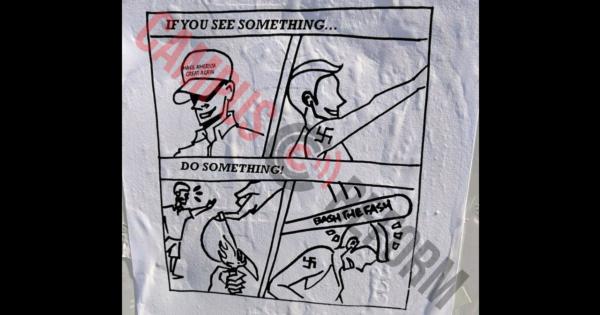 The flier, which WRAL reports was found on a distribution box of The Daily Tar Heel student newspaper, featured a political cartoon captioned, “If you see something… Do something!”

“Its intentions are to incite violence, and there is no place for that here or in our society.”

The first portion of the cartoon shows a Trump supporter wearing a "Make America Great Again" hat, which in the next panel is taken away and burned with a lighter. Next, a neo-Nazi with a Swastika tattoo is shown raising his hand in a salute, then being bludgeoned in the back of the head with a bat labeled “Bash the Fash.”

In an email to the student body Thursday, Chancellor Carol Folt described the flier as “expressing acts of violence to supporters of Donald Trump,” calling its message the “antithesis of the values that are the foundation of our university” because it was solely intended to “incite violence,” rather than promote the free exchange of ideas. 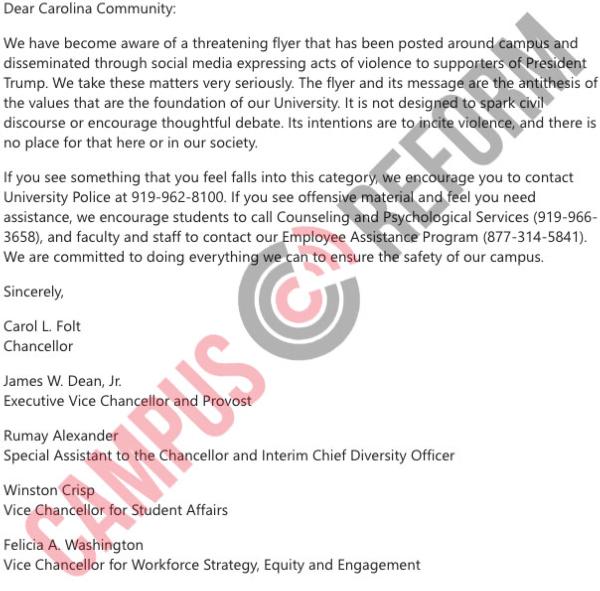 “It is not designed to spark civil discourse or encourage thoughtful debate,” Folt declared. “Its intentions are to incite violence, and there is no place for that here or in our society.”

The flier controversy comes in the wake of anti-Trump protests and violence across American college campuses. Anti-fascist demonstrators clad in black have organized or usurped protests at schools like the University of California, Berkeley and New York University in attempts to shut down visits from outspoken right-wing lecturers Milo Yiannopoulos and Gavin McInnes.

Folt concluded by urging students to contact university police and counseling services if any other offensive materials were sighted, and was cosigned by the provost, interim chief diversity officer, and two vice chancellors.

A photo of the flier was originally shared in the “Overheard at UNC” Facebook group, where its interpretation was hotly debated by students.

“Advocating violence against Carolina conservatives is totally the best,” UNC College Republicans Chairman Frank Pray commented sarcastically, prompting another student to point out that “swastikas aren’t ‘conservative’—they are racist, violent, and uphold the genocide of millions of people.” 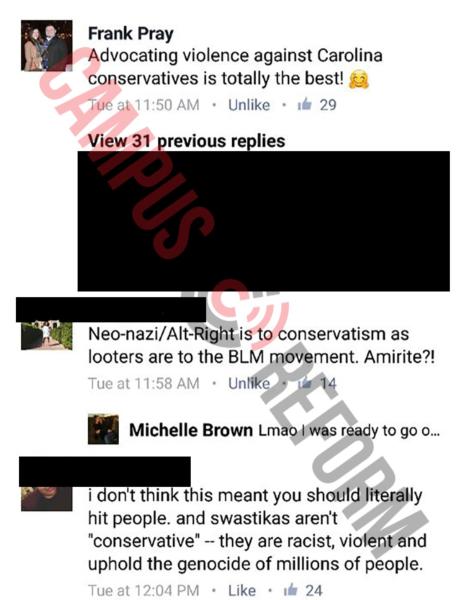 “Swastikas have no business being associated [with] either conservatives or liberals, for that matter - but the destruction [of the] ‘Make America Great Again’ hat goes against the First Amendment,” a classmate agreed. “People should be able to express their political opinions.” 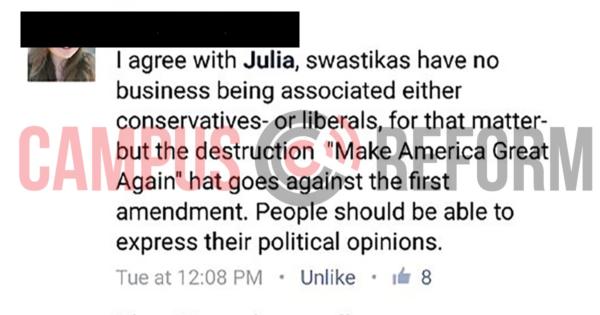 Other students concurred with the sentiment, as well.

“Seeing this picture and thinking ‘this advocated violence against Carolina conservatives!’ is horribly disingenuous towards conservatives as a whole,” said Noah Howell. “That underlying assumption is that swastikas represent some part of conservative ideology.” 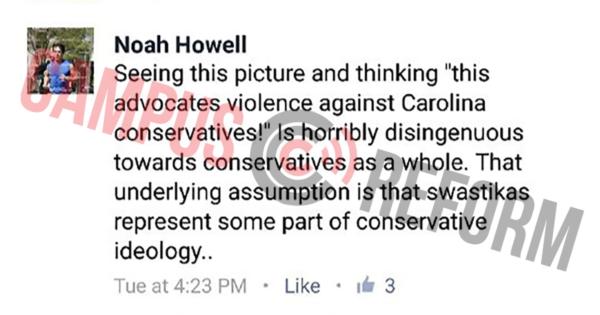 Some students, however, took that reasoning in the opposite direction, charging that those who interpreted the cartoon as an endorsement of violence against conservatives were revealing fascist sympathies.

“Punching actual Nazis is part of the Carolina Way,” one student quipped, while another opined that “the only thing these threads prove is that Frank Pray is a fascist.”

“The alt-right is hot garbage,” added a third student, saying, “I’m not gonna fight for the rights of fascists when they’re trying to step all over everyone else’s across the world.”

In most cases, though, someone was willing to counter those accusations, including one student who pointed out that “if you support or advocate for stealing a stranger’s hat and burning it or otherwise assaulting him because he didn’t vote ‘correctly,’ as is depicted in this comic, you are closer to fascism than the average Trump voter.” 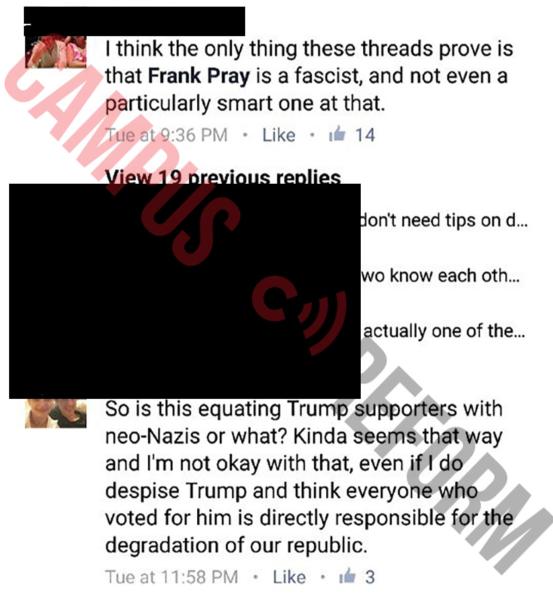 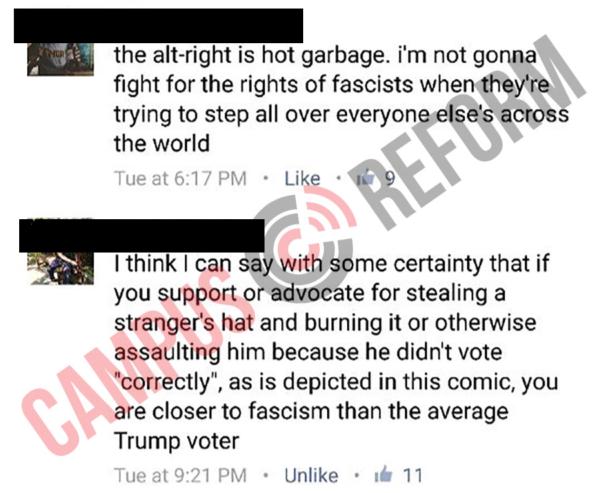 Some students even considered Trump supporters’ freedom of speech legitimate despite their political differences.

“So is this equating Trump supporters with neo-Nazis or what?” a commenter asked. “Kinda seems that way and I’m not okay with that, even if I do despise Trump and think everyone who voted for him is directly responsible for the degradation of our republic.”