The hacker(s) posted propaganda to her account favoring the CCP.

A leader of a conservative student group discovered that her Instagram account was hacked Tuesday night “by Communist sympathizers” only a week after her vocal involvement with the #CCPNotForMe campaign.

The student, Jessica Warner, remains strong in the face of the cyberattack, saying, “This attempt to silence me makes me want to fight back even harder.”

A conservative student in the U.S. alleges that her Instagram account was hacked after she expressed criticism of the Chinese Communist Party.

Young Americans for Freedom chapter chair Jessica Warner of Western Washington University says she was targeted “by Communist sympathizers” in response to her “efforts to expose the abuses of power committed by the CCP,” saying, “the hacker posted pro-Chinese-Communist-Government propaganda. They altered my bio, and tried to keep me locked-out for hours.”

Warner declares that despite this cyberattack, “I will NOT give in to attempts to silence my pro-freedom message. #CCPNotForMe.”

My Instagram account was hacked by Communist sympathizers after my efforts to expose the abuses of power committed by the CCP.

I will NOT give in to attempts to silence my pro-freedom message. #CCPNotForMe @yaf pic.twitter.com/TtwKK9No6o

Pointing out that the CCP “lies and manipulates,” Warner says she also has previously held signs stating facts like, “Africans in China are being REFUSED service and having tests FORCED on them at their own expense [...r]egardless of whether they have been to Africa in the past few months or not,” and, “China has supplied the world with faulty masks while at the same time trying to increase their own image by flaunting their generosity.”

These comments are part of a social media initiative by YAF called #CCPNotForMe, which exposes facts about life in Communist China.

Warner says that the CCP has attempted to “cover-up the origins of the COVID-19 outbreak,” has “trapped a million Muslims in re-education camps, and so much more.”

Warner provided Campus Reform with screenshots showing a post by the hacker(s) on Warner’s account, saying, “Without the Communist Party there would be no new China.” 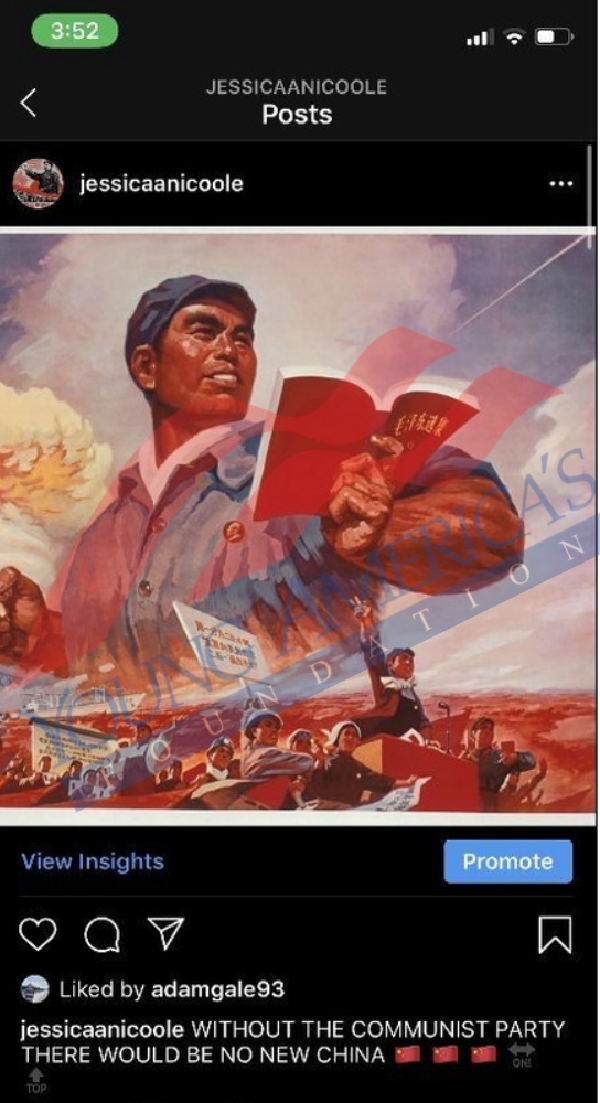 Warner spoke with Campus Reform, identifying herself as part of the “six decades” legacy of “Young Americans for Freedom,” an organization that “has been ringing the alarm about the dangers of [C]ommunism,” adding, “Thanks to YAF's continued leadership, student leaders like me today get to carry out that legacy.”

“Evil exists,” Warner asserted. “The Chinese [C]ommunist [P]arty is an example of that. I am disturbed, but not terribly surprised that Chinese Communist sympathizers attacked my free expression. This attempt to silence me makes me want to fight back even harder.”

Warner told Campus Reform that she remains optimistic about the future since she discovered that “someone as small as you can make a difference and inspire change. The truth is powerful.” Guided by the examples of previous generations of YAF activists who stood for principle, Warner said, “it inspired me to do the same.” She concluded her comments to Campus Reform by offering a message to other young activists: “If you stand for what you believe in, act boldly and speak the truth, you can make a difference too.”