She also referred to Trump supporters as "Nazis."

"Historically, there were a lot of really nice Germans who voted for the Nazis," she told Campus Reform.

Catherine Prendergast, professor of English at the University of Illinois at Urbana-Champaign, recently posted a Twitter thread, advocating for an election cycle where whites are not allowed to vote.

A professor at the University of Illinois at Urbana-Champaign recently referred to Trump supporters as Nazis and called for "an election cycle where whites don't vote."

"Bear with me while I make my push for two election cycles where whites don't vote," tweeted English Professor Catherine Prendergast. "I realize this is crazy and impossible, but I truly believe a demonstrative sacrifice is needed on behalf of whites to correct this dire course we're on."

"As long as suppression/gerry-mandering  [sic] cannot be addressed because Republicans have neutralized Congress, stolen the executive branch, stacked the judiciary and thus created one party rule, we effectively have a franchise for whites, and a limited franchise for others," Prendergast continued.

Bear with me while I make my push for two election cycles where whites don't vote. I realize this is crazy and impossible, but I truly believe a demonstrative sacrifice is needed on behalf of whites to correct his dire course we're on.

Prendergast then referred to Trump supports as "Nazis."

"MAGA equals Nazi," says Prendergast. "You went to a Trump rally after children were put in cages, you don't get to be a police officer."

"Germany had to make some aggressive steps to restore democracy: Known Nazi's can't be in government, Holocaust denial is a crime," furthered Prendergast. "We need steps like that. We need FINALLY to own our history is THAT BAD as to require such measures."

"Historically, there were a lot of really nice Germans who voted for the Nazis, even when they knew they were rounding up their neighbors (as we are now rounding up children and putting them in cages) and that, knowing that, they continue to vote for a party that makes such acts their platform, they own the consequences of their choices, including how they appear to others," Prendergast told Campus Reform.

In a follow-up email, Prendergast said the following: “Now, Blair, Those comments were made on my personal Twitter account, so you cannot quote them as having been made in my official capacity. I’m also going to share with twitter your interest in my personal words. I hope you don’t mind.”

“Well look here I got an email from a student in my uni writing for ‘Campus Reform,'" said Prendergast.

Well look here I got an email from a student in my uni writing for "Campus Reform" "I am writing an article about your recent Twitter thread where you advocated for an election cycle where only non-whites can vote and referred to Trump supporters as Nazis.

“I would only ask the author, @realblairnelson, please bear in mind I have a child, a husband, and two cats, and really would prefer not to get shot, so, you know, keep it light. Keep it light.”

“The rag takes tax deductible contributions!"  the professor went on, referring to Campus Reform. “Wonder who is funding them. They seem to feel that 'China' is funding Biden's campaign. Which sounds kind of ‘partisan’ to me as they never criticize Trump. I should write the IRS with my concerns.”

Campus Reform has been sounding the alarm on China’s influence on higher education for years, especially in recent months. However, Campus Reform has made no suggestion or assertion that the Biden campaign is funded by China.

Prendergast went on to assure that “the Deans are not concerned” with her online behavior, focusing again on her distinction of her Twitter account being “private.”

“This is my private account. The main job of this rag seems to be to generate donations and smear Biden and high education as a whole. If they go after me personally, well, there are the legal issues they face,” Prendergast continued.

I have been there, believe me, and the Deans are not concerned. This is my private account. The main job of this rag seems to be to generate donations and smear Biden and high education as a whole. If they go after me personally, well, there are the legal issues they face. 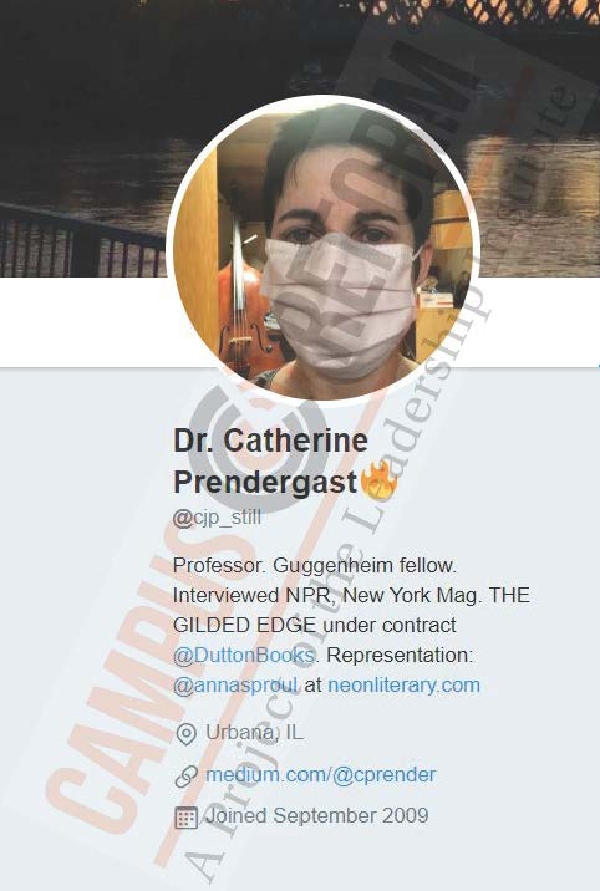 “The Turning Point crowd is well known among the Deanery and absolutely disregarded as the abusive bullies that they are.”

Blair Nelson is an editor for The RFAngle. Previously he was an Illinois Senior Campus Correspondent. He graduated from University of Illinois at Urbana-Champaign.