The professor's tweets came under fire by free speech experts.

An LSU professor promised to "drop" students who engage in "hate speech" from her classes.

The professor has since deleted the tweet but another professor replied in support.

A Louisiana State University assistant professor called on her colleagues to create a list of students who engage in “hate speech,” so that she can drop them from her classes in the future.

Amid calls for action to be taken against students who engage in “hate speech” on campus, Louisiana State University reminded students on its official Twitter account that as a public university, “we are subject to constitutional limitation on our ability to take action in response to free speech.”

In response, LSU Assistant Professor of Biological Sciences Alyssa Johnson shared the university’s tweet with a comment revealing that she wishes to take matters into her own hands. She appeals to her fellow professors to “keep a list of names” of students who utter hate speech because “it’s a threat to student safety.”

Johnson even took it a step further by saying, “if I see them enrolled in my course, I will drop them.” 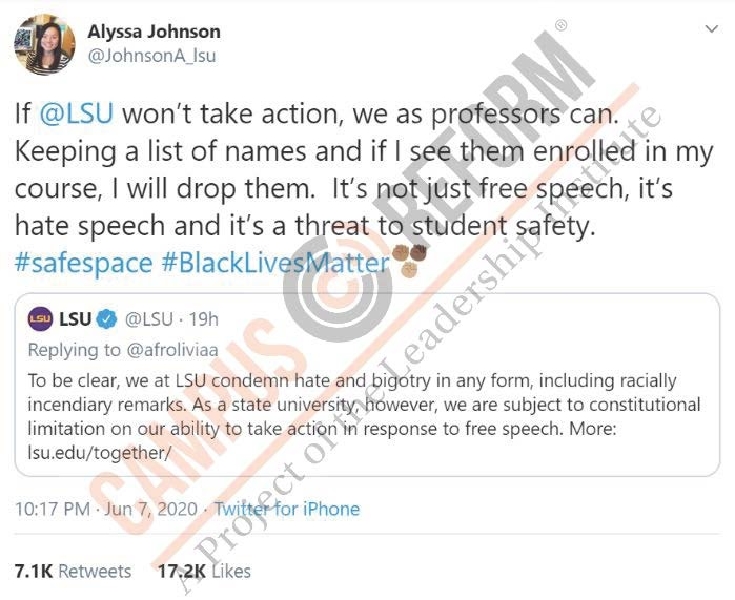 In response to the calls for her resignation, the Twitter account LSU Against Racism asked students to send an email to the biological sciences department chair “sharing their support for Alyssa Johnson."

LSU associate professor, William Doerrler, responded to one of Johnson’s deleted tweets stating, “Thank you!! If he enrolls in my class I’ll drop him too!” Most tweets responding to Doerrler cited his employment as a state employee as the reason this behavior is unacceptable.

President of Speech First Nicole Neily explained to Campus Reform, “LSU is a public university, which means that they - and their employees - must uphold the First Amendment. They cannot discriminate against students based on the content of their speech... which is exactly what this professor has called for!”

“Even if this isn' t sanctioned by the school - for a professor (again, a state employee) to do this might open him/her up to being held personally liable for violating students' rights,” continued Neily.

“Professors taking action against students based on the student's extramural comments is not protected. FIRE has repeatedly explained that there is no hate speech exception to the First Amendment,” the Foundation for Individual Rights in Education told Campus Reform.

“Who would create and curate such a list? What would be the criteria? What if a comment was taken out of context and used against someone? Would there be some kind of appeals process or redress?,” Neily pointed out to Campus Reform.

“Imagine the reaction if a conservative professor promised to do the same thing to students who made remarks perceived as hateful toward the police,” said Neily.

The day following Johnson’s post, LSU released a statement on Twitter apologizing for its previous tweet highlighting the "constitutional limitation," saying it “did not effectively communicate [LSU’s] core message and consequently alienated [their] students and friends.”

“Today, we met with Black student leaders to pledge again that LSU will investigate and take action against all acts of racism, hostility, harassment and intimidation by students under our code of conduct. We will hold violators accountable,” the tweet continued. “But apologies are insufficient – only demonstrable and sustained action builds trust with our students, staff and faculty.”

Johnson and Doerrler did not respond to Campus Reform’s request for comment in time for publication.