In an email obtained by 'Campus Reform,' the dean of the journalism school at the University of North Carolina asked a reporter at ABC News to 'protect' Nikole Hannah-Jones amid the tenure controversy this spring.

Trending
1
Stanford band mocks Christians during halftime show
By Thomas Stevenson '23
2
Harvard Law instructor: 'It is our civic duty to accost' the '6 justices who overturned…
By Blake Boudreaux  '25
3
UChicago announces 'The Problem with Whiteness' course
By Caroline Cason  '22
4
Steven Crowder delivers fake ‘Fatness as Self-Care in the Era of Trump’ paper in drag a…
By Katelynn Richardson  '22
5
Will Witt responds to students' accusations that he is a 'fascist'
By Kate Anderson
6
College drops disciplinary charges against conservative student
By Toni Airaksinen
Angela Morabito | Spokeswoman, Defense of Freedom Institute
Friday, July 30, 2021 8:39 PM

In late May, ABC Deputy Political Director Averi Harper emailed UNC Journalism and Media Dean Susan King to ask why Hannah-Jones had not been granted tenure. King told her that the Board of Trustees had declined to consider Hannah-Jones' application package, adding:

"Protect Nikole. She deserves it and I'm doing all I can to make this right. We really want her here."

Hannah-Jones, author of the "1619 Project" and sought-after college guest speaker, was being considered for a tenured position despite having never taught a college course. 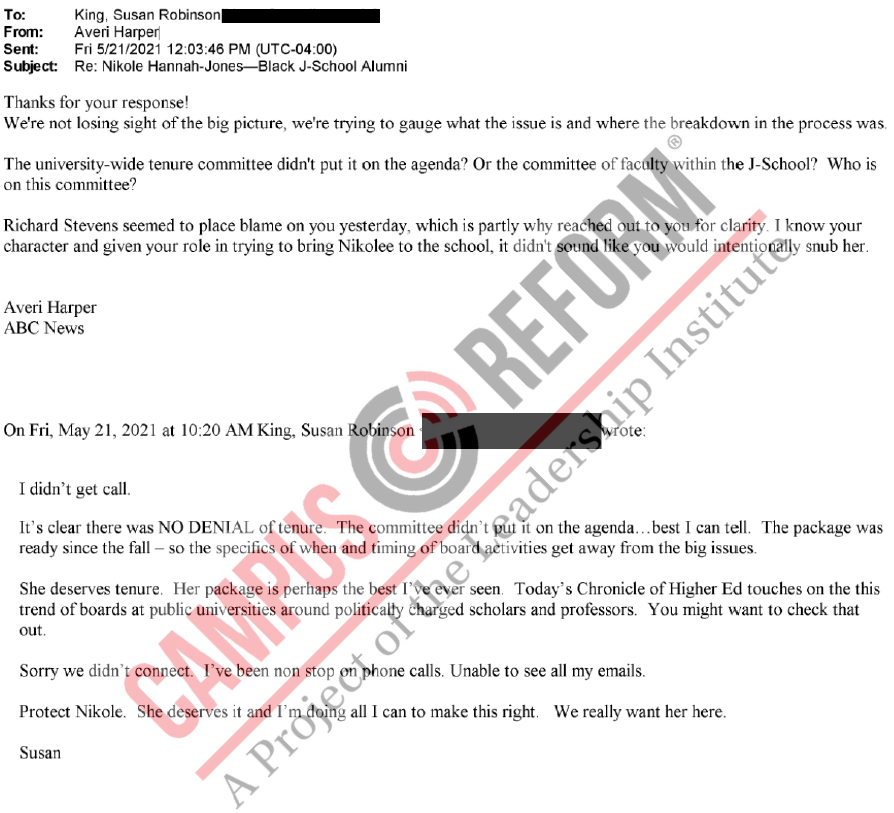 King told Harper, "She deserves tenure. Her package is perhaps the best I've ever seen."

[RELATED: UNC Board of Trustees grants tenure to Nikole Hannah-Jones]

Though UNC's Board of Trustees voted on June 30 to grant tenure, Hannah-Jones turned them down and instead accepted a professorship at Howard University, her alma mater.

Averi Harper is an alumna of the UNC Hussman School of Journalism and Media.

The University of North Carolina sent Campus Reform a statement after publication reading, "Ms. Harper was seeking clarity on the tenure process to inform a statement that she and fellow Black J-school alumni posted in support of Nikole Hannah-Jones on May 24, and Dean King responded in kind."

Campus Reform reached out to Averi Harper for comment. This article will be updated accordingly.