Woody White, a former trustee at UNC-Wilmington, resigned his post on September 23. The letter is not the first time White has taken action against liberal bias.

Woody White, a former trustee at UNC-Wilmington, resigned his post on September 23 with a scathing resignation letter that calls out the university’s chancellor for allowing severe bias against conservatives to persist at the university.

The letter is not the first time White has taken action against liberal bias: In June, he asked the chancellor to investigate a professor who posted “Blow up Republicans” on Facebook, following a Campus Reform report on the post.

[RELATED: UNCW professor: 'Blow Up Republicans' FB post was an attempt to 'blow off steam']

As a trustee, White was one member of a group charged with advising the university on how to carry out its educational mission. He earlier told Campus Reform that trustees at any college have a moral obligation to stand up against injustice.

White said, “If you take the oath of office and you agree to sit in that chair, then do your duty, speak out, advocate, and don’t fear consequence,” White said.

Adams had sued the university on First Amendment grounds, and both parties agreed to a settlement that would have forced him to retire. Adams died by suicide just days before he was set to retire.

White also alleges that the university cheated students by listing classes as in-person and then allowing professors to deliver them remotely, as the local outlet Port City Daily reported last month.

Read the full letter below.

Editor's Note: The text below is re-published from White's LinkedIn posting, which announced his resignation and included an image of the official resignation letter. The text has been edited by Campus Reform for length and clarity in full cooperation with White.

My dad graduated from the University of North Carolina Wilmington in 1974 with a degree in marine biology.

He was in the first class of that now renown program. As a veteran, it gave him options under the GI Bill that other schools did not offer.

My family always been proud supporters. My son was a ball boy for the basketball team, and I don’t think we missed a game in a 12-year span.

But it used to be different place. Unique. A place that valued free expression, welcomed all points of view.

Like too many other American universities, UNCW shuns conservative voices, it looks the other way, and it perpetuates the double standard.

UNCW places high value on diversity, equity and inclusion; programs, stats, and presentations on DEI are in every meeting, touting the metrics of race, gender, and sex, as if those metrics are all that matter in the real world.

UNCW knows that thousands of students engage in self- censorship, but it does nothing about it.

What matters more than anything else in creating well-rounded adults? Fostering diversity of thought, teaching innovative ways of solving problems help achieve this goal.

But at the UNCW board meetings? Not a peep about how important it is to nurture diversity of thought on college campuses. 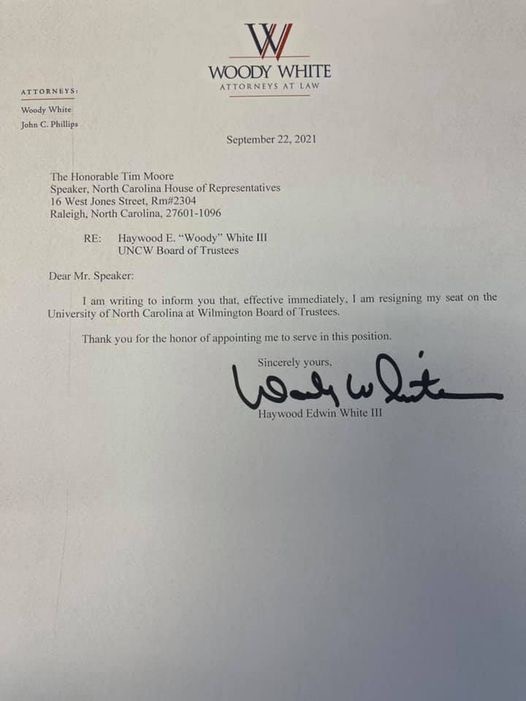 Suggesting that it is important draws looks. And not good looks.

For example, when a conservative professor fights for equality in his 1st Amendment rights and wins $700,000, he remains an outcast by an unrepentant Administration and bullied to a point where he kills himself.

But when a liberal professor advocates violence against conservative students, nobody says anything. Nothing happens.

Despite his successes in enrollment growth and student housing, his neglect of the real issues that matter in the long run is Chancellor Jose V. Sartarelli’s true legacy.

So, I have chosen to engage elsewhere, where my efforts will matter.

Regarding the story today in the PCD about some professors opting to go online again; Students who object to these recent policies and are adversely affected, should ask for a refund.

We are becoming softer as a nation with each one of these decisions.

Why big donors, who care about America and its future, keep giving money to these universities, I can’t figure.

An even bigger question is why cannot a conservative legislature use its funding power to ensure that free expression and fairness are protected on every campus under its domain?

Perhaps something can be done to change where these dollars go.

In the meantime, I sincerely enjoyed helping so many students that sought refuge in my office, who felt unsupported and called me for help. Their voices were heard and will grow louder if I have anything to do with it.

To everyone that shares my views, share this post, and start to direct your money to other places.

It might be too late. But I’m not throwing in the towel just yet. I hope you won’t either.