Nearly 100 students at the University of San Diego, a Catholic institution, turned out to protest a pro-life speaker.

Flyers promoting the event were also torn down ahead of the event.

A female student at the University of San Diego, a Catholic institution, tore down a pro-life poster prior to other students’ pro-abortion protests, Student for Life reported recently.

Hawkin’s speech, “The Future is Anti-Abortion,” focused on how pro-life activists should prepare for Roe v. Wade potentially being overturned.

In a statement to Campus Reform, USD stated that “As an academic institution, the University is committed to creating and maintaining an environment in which a variety of ideas can reasonably be expressed, discussed, and critically examined.”

“In this instance, the speaker was invited to express views on abortion, a topic of interest to many in our community,” a spokesperson for the university continued. “While we are aware some in our community disagree, and exercised their right to protest, It [sic] is our belief that a university campus is exactly the kind of place where such discussion and debate should occur.”

The Catholic Catechism, an official Church document which outlines the beliefs of Catholics, condemns abortion as a sin. 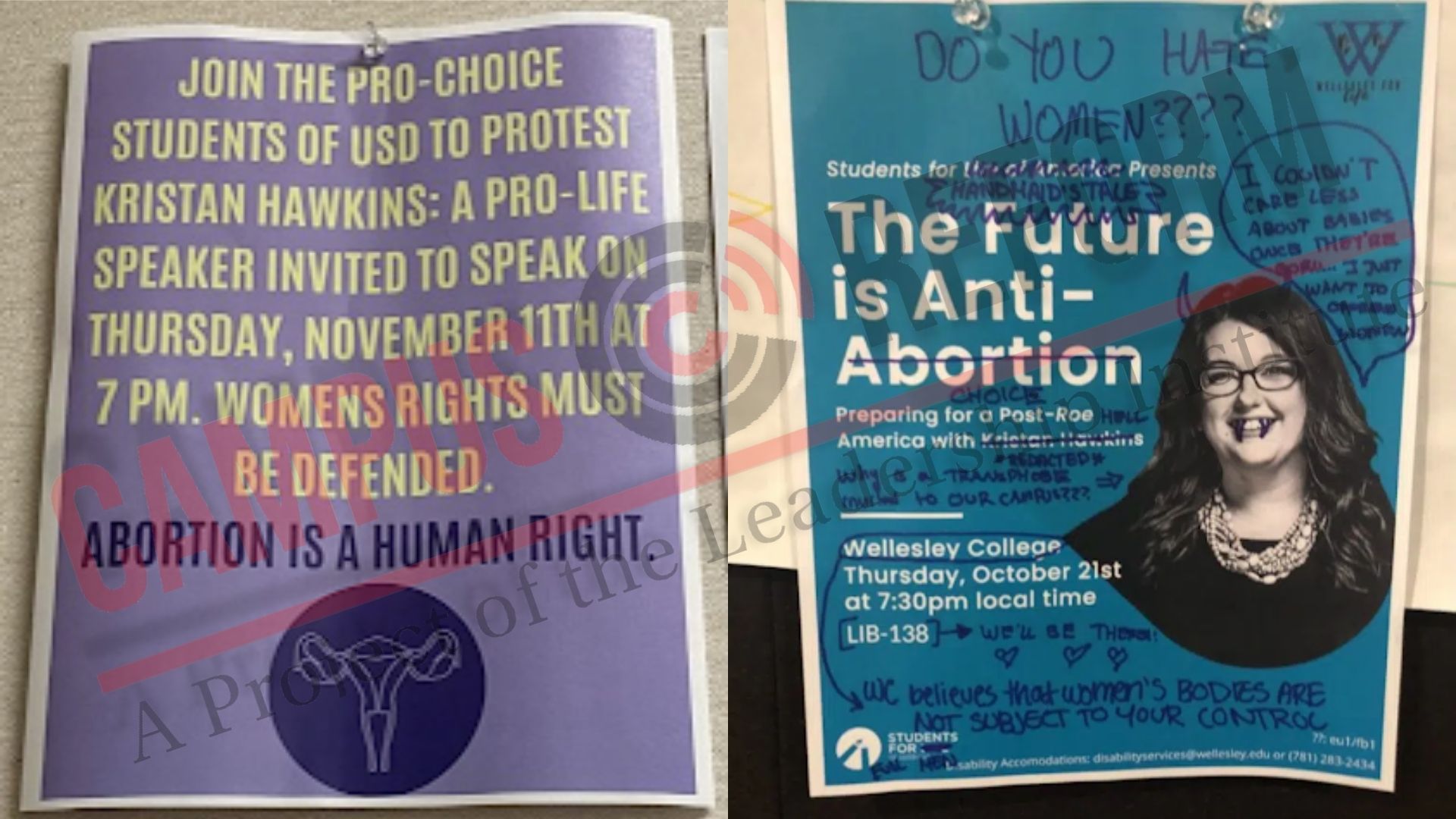 Hawkins faced a similar environment at Wellesley College in October when giving a similar speech as part of her campus tour. Flyers promoting the event were marked up by students who disagreed with Hawkins. She was portrayed as the devil, accused of transphobia and misogyny, and apparently threatened with protest with the message “We’ll be there!”

“Like many schools have tried to do, pro-abortion students at Wellesley College are attempting to cancel me by blatantly lying about me and my positions,” Hawkins said in an October statement. “They are even attempting to cancel their fellow students who are members of Wellesley For Life, demanding the pro-life group be de-constituted on the basis that its members invited me to speak.”

Hawkins offered tickets to protestors USD, asking them to come listen to her speech then ask questions to better understand her position.

Toreros for Life, the student group that invited Hawkins to USD, told Campus Reform in a statement that “the protestors were very disruptive” and that they could be heard in classes that were going on nearby.

In a statement to Campus Reform, Kristi Hamrick, a Students for Life spokesperson, called the actions of protestors “aggressive.”

“We are consistently finding at events across the country that those advocating for the violence of abortion often turn to violence themselves against peaceful pro-life advocates,” Hamrick stated.

Campus Reform contacted the USD department of public safety regarding whether they have plans to address the protestors allegedly violating rules; this article will be updated accordingly.

Members of Students for Life and Toreros for Life took the photos and videos shown in this article.