College Republicans, Turning Point USA, and Students for Life united together to release a statement criticizing the tweet.

Campus Reform spoke to students about their experience with anti-conservative bias.

The president of San Diego State University publicly criticized one of the school’s deans yesterday for an apparent anti-conservative tweet that equated the political “Right’s agenda” with “stench.”

“I will always stand by the right to free speech, but I do not condone or agree with what she said. I do not support actions that seek to divide us or undermine civic discourse for any reason,” Adela de la Torre said in a statement.

Casper is dean of the university's College of Arts and Letters. Campus Reform obtained a copy of the post, which has since been deleted. 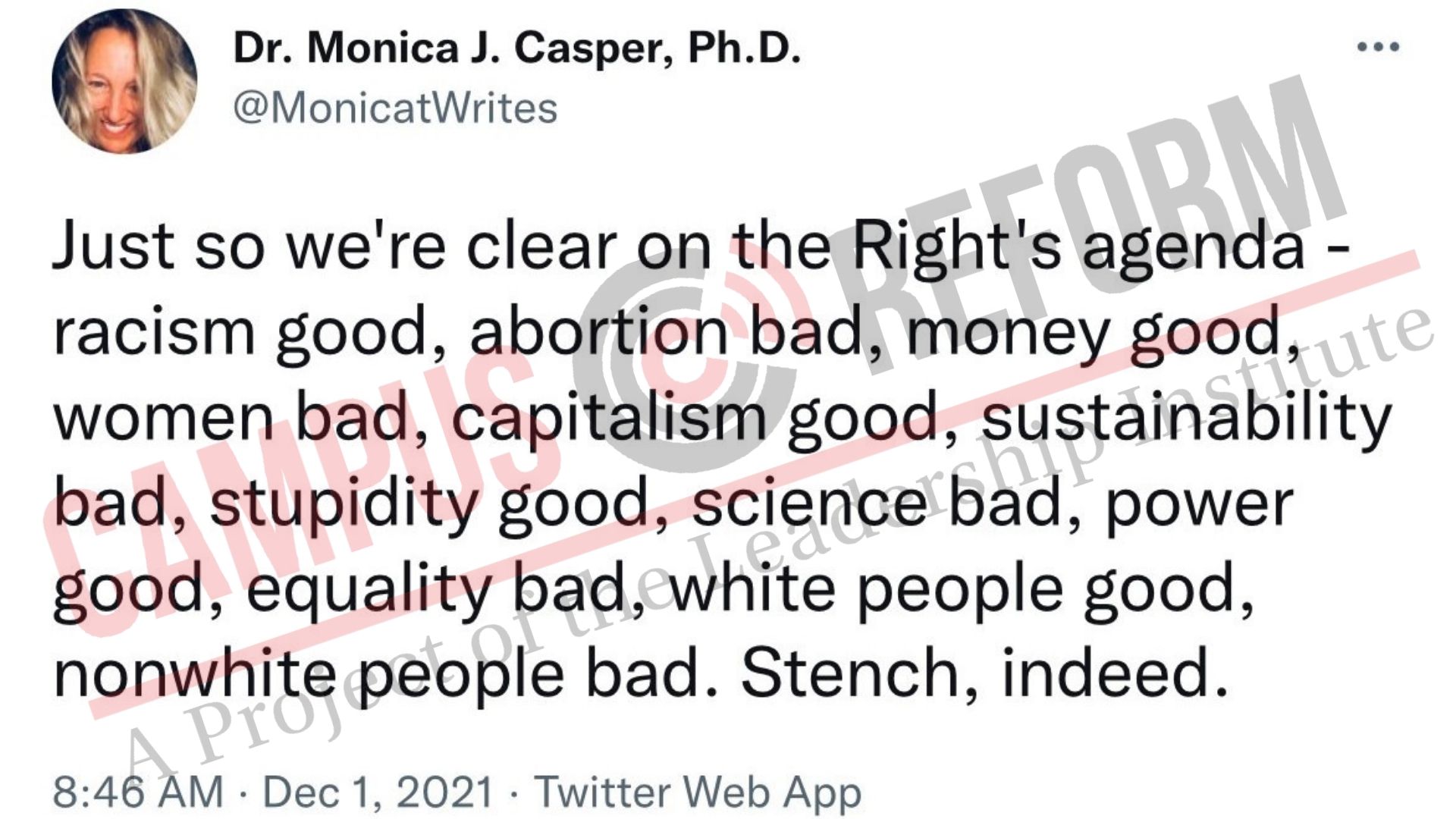 The SDSU College Republicans, the school’s Turning Point USA chapter, and Students for Life at SDSU then released a joint statement criticizing Casper’s decision to tweet that message while holding her leadership position.

“Many members of our conservative-minded communities are pursuing their degrees within the College of Arts and Letters, of which Dr. Casper is Dean,” the statement read. “If this is how she feels about conservative students, then her declared dedication to their success is marred by her highly partial and divisive statements pertaining to them, and therefore must be called into question.”

Kiarra Mapp, a student at the university and president of its Turning Point USA chapter, spoke to Campus Reform about conservative students’ experience on campus.

“We deal with all kinds of people saying nasty things to us online,” Mapp said. “It’s mostly from the general student body. We know that a lot of the students who come to us and say these things, they either get it from what they see on their phones or generally from the media. They even get it from their professors.”

“When we saw that this administrator, a pretty high up administrator at that, was saying these things,” Mapp said about Casper,” it just proved our case even further that we have a whole system against us.”

While the joint statement affirmed Casper’s right to her opinion, it also accused the university of failing to uphold the University Senate’s statement on diversity, which extends to protect “religious and political beliefs.”

“College is supposed to be a place of diverse thought, productive dialogue, optimism, and inclusion. When an institution like SDSU defends unrefined individuals like Dr. Casper, despite claiming their dedication to diversity, then it is evident that they are more dedicated to defending their administrators than they are to upholding the values they claim to espouse.”

SDSU College Republican President Joshua Rawson told Campus Reform, “Our hope is the school take action against Dr. Casper in a form of a public reprimand or some type of disciplinary action and an apology issued on behalf of the school.”

“There needs to be consequences for her hateful rhetoric against Conservatives on campus,” he added.

This is not the first time Campus Reform has reported on liberal bias against conservatives and religious individuals at San Diego State University.

In July, Campus Reform reported on vandalism targeting the campus’s Chabad house in an anti-semetic act. Surveillance footage caught the transgressors fleeing the scene with a banner torn down from the house, and carrying a stolen Menorah that was broken in the process.

In 2018, the university offered a course to students that focused on removing former President Donald Trump from office. The name of the course was then changed after an influx of public backlash, but the required reading continued to center around Trump.

When asked to comment, San Diego State University replied, “Having such a uniquely diverse community is our strength, and we will continue to advocate for actions that minimize attempts to polarize and divide and, instead, encourage those that serve to unite people across backgrounds and beliefs.”

Campus Reform reached out to Casper for comment; this article will be updated accordingly.