Campus Reform conducted an analysis of Google Trends results, which show that shows web searches for BLM have decreased since the summer of 2020.

Support for BLM has also decreased nearly 20% during that same time period.

Campus Reform conducted an analysis of Google Trends results, which show that shows web searches for Black Lives Matter (BLM) have decreased since the summer of 2020.

Support for BLM has also decreased nearly 20% during that same time period, according to a Civiqs poll.

Campus Reform reports on both the influence Black Lives Matter and transgender ideology have in higher education, as well as the impact those ideas have on American society.

The Google search for "Black Lives Matter" peaked in popularity in the summer of 2020 following the death of George Floyd in May.

That August, University of Washington Professor Stuart Reges outlined to Campus Reform why Black Lives Matter's leadership and values made ill-suited to advocate on behalf of Black Americans or fight for "freedom and dignity for all."

Since 2020, the decline in public interest followed a streak of protests, per Google Trends numbers.

A slight increase occurred in April 2021 after Minneapolis Police Officer Derek Chauvin was convicted for Floyd's death, but the downward trend continued into 2022.

Chicago is experiencing a "crime wave" in 2022, per Fox News reporting. Two years prior, Chicago Mayor Lori Lightfoot "pledged to cut $80 million from her city’s police budget," according to Fox 17 WZTV Nashville. 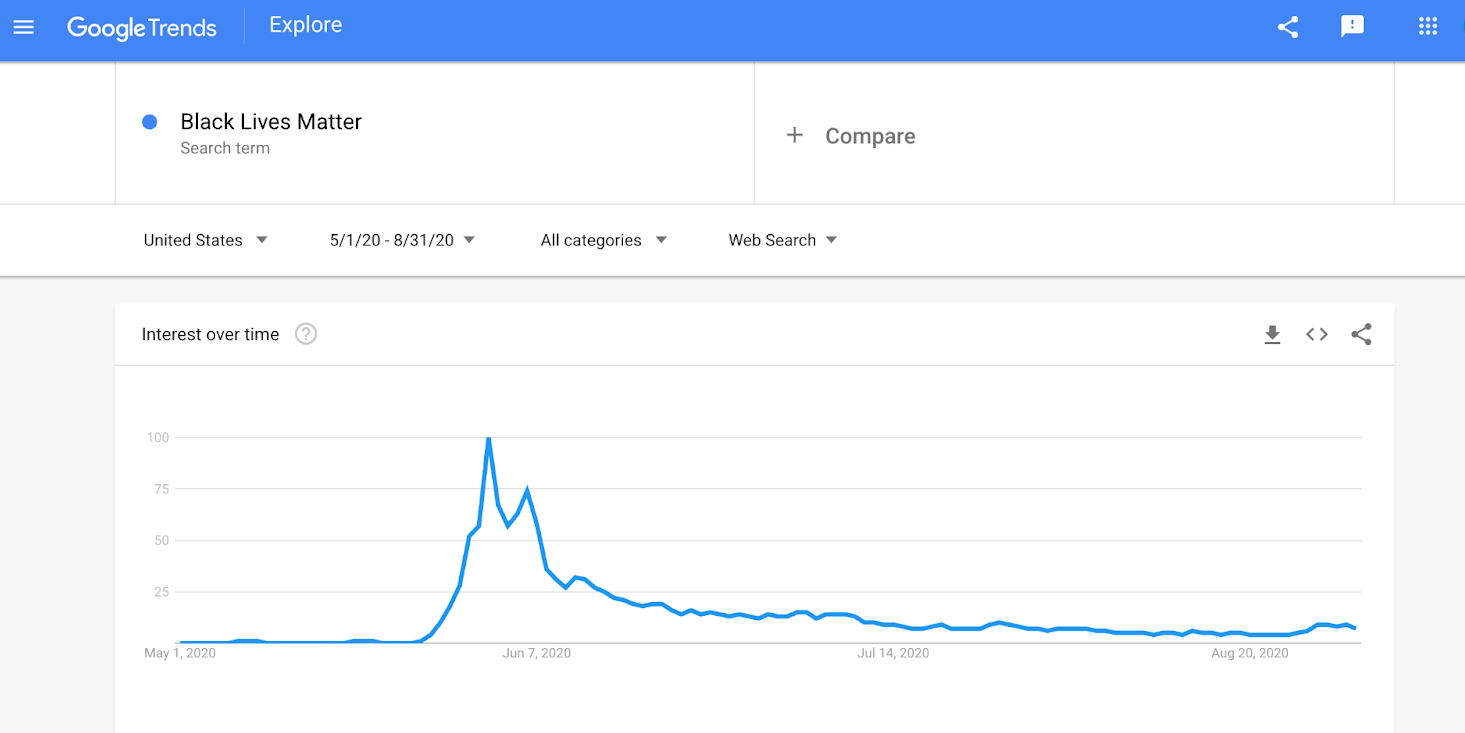 Contrastingly, a Google Trends analysis of transgender-related searches revealed an increase in public interest between spring 2021-2022. The terms "trans" and "transgender" both peaked from the end of March to mid-April 2022.

The peak came during a national controversy that sparked after transgender swimmer Lia Thomas won a national title at the 2022 NCAA Women's Swimming Championships.

Campus Reform covered Thomas' win in March, speaking on the ground with students at Georgia Tech, which was host to both the championships and Daily Wire host Matt Walsh's speech on men in women's sports. 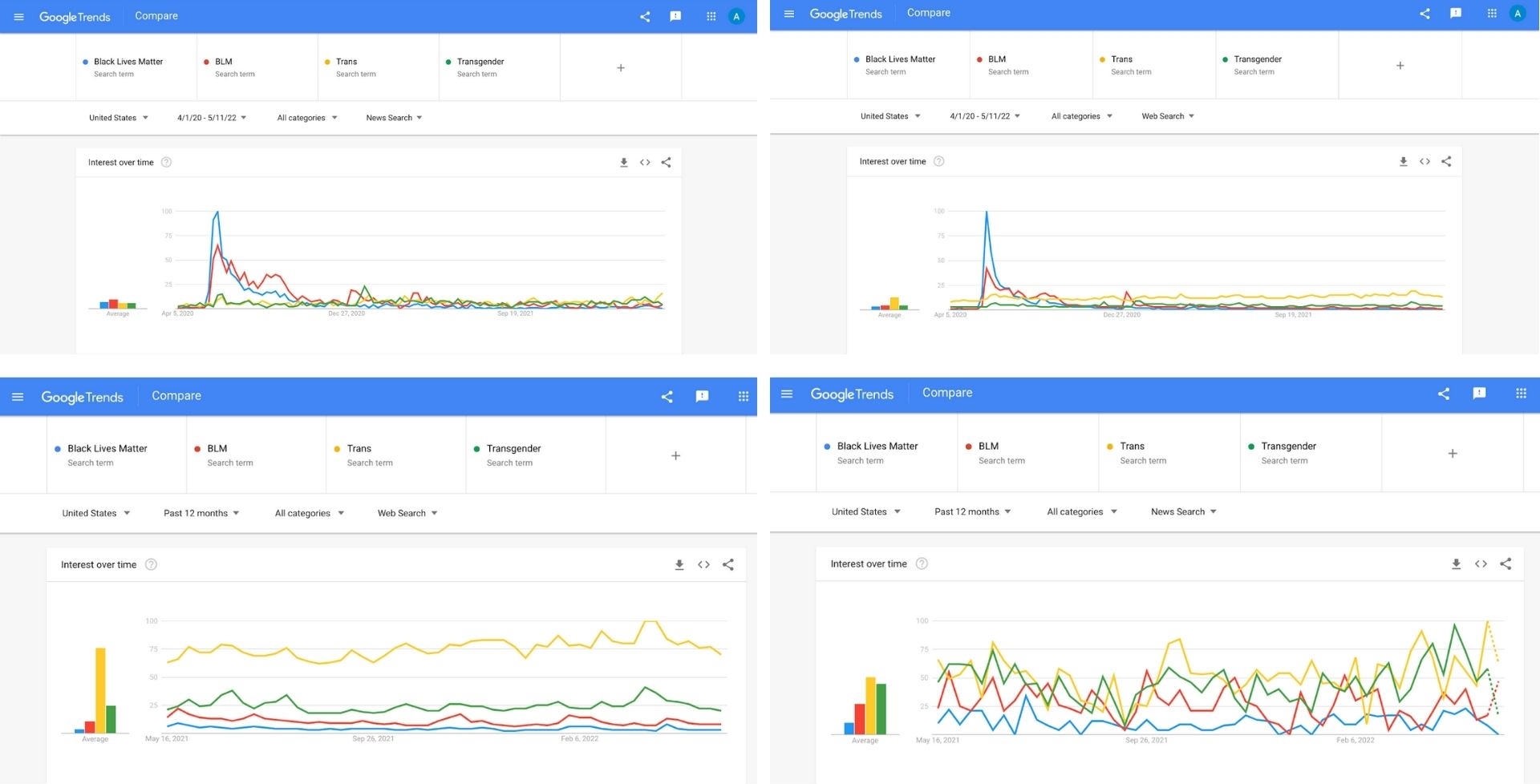 The patterns of public interest appear to rise and fall with news cycles, as peaks for the BLM movement were highest during the protests that occurred nationwide summer of 2020.

The American Conflict Location & Event Data (ACLED) project reported more than 10,600 demonstrations occurred "across the country." Of the total, 570 protests were reported to have been violent.

80% of all "demonstrations" were "connected to the Black Lives Matter movement or the COVID-19 pandemic," ACLED stated.

BLM searches have been at record lows throughout 2022. The numbers have continued to decline as controversy continues to surround BLM officials.

In March 2022, a BLM leader in Boston was served an 18-page indictment for fraud and conspiracy for alleged mishandling of Violence in Boston (VIB) donations.

VIB is a non-profit that aims to "help violence survivors in the city," Fox News reported.

Politicians, particularly Democrats, are also backpedaling support for defunding the police after cities have begun experiencing an increase in violent crime.

"Defund the police" was one of the seven demands of the BLM movement.

Minneapolis City Council voted to defund the police department in December 2020. Since the vote, the city has nearly set a record number of yearly homicides.

The Associated Press has reported that Portland, Oregon, experienced an 83% increase in homicides in 2020 as well as 100 consecutive days of riots during the 2020 summer.

"For you people in Florida, we're going to have a gay night," she stated. Amy Schumer and Regina Hall then joined Sykes in chanting the word "gay."

The bill has also been criticized by a number of Florida legislators, the Walt Disney Corporation, and the Biden administration.

According to recent polls on both Black Lives Matter and transgender topics, public support for both topics has been declining.

A YouGov America poll on transgenderism also found that 40% of Americans believe that an individual should be allowed to legally identify with a gender different than their biological sex. Approval is highest among Democrats at 67% of respondents.

Campus Reform has reached out to the parties mentioned; this article will be updated accordingly.

Abigail Streetman is a Florida Campus Correspondent with Campus Reform. She is a third-year student at the University of Florida, majoring in biology and minoring in innovation. Abigail is the UF Turning Point USA president, Gainesville Activism Hub president, and a member of College Republicans, Network of Enlightened Women, and Young Americans for Liberty.