Students for a Democratic Society at the University of Wisconsin, Milwaukee advertised an abortion protest hosted by the Freedom Road Organization Milwaukee chapter on Independence Day.

George Mason University YDSA and Oakland University PPGA posted a link to an interactive map, titled 'We Won’t Go Back,' which features protest locations across the country.

Students for a Democratic Society (SDS) at the University of Wisconsin, Milwaukee advertised an abortion protest hosted by the Freedom Road Organization (FRSO) Milwaukee chapter on Independence Day.

“Not interested in celebrating this country on the 4th? Neither are we!” the organization declared on social media.

Wisconsin is one of six states that implemented an abortion ban, and, with Roe’s reversal, a 172-year-old statute will become law, and abortion a felony in the state. 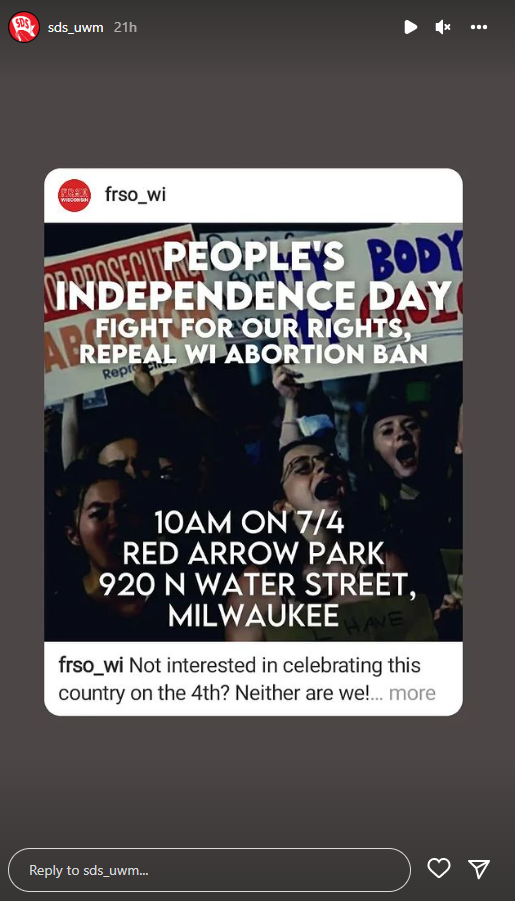 The University of Minnesota SDS chapter hosted a “March for More Clinics” on Saturday, hoping  to make WI a “midwest sanctuary.”

The chapter called “on University administrators to stand with us in the fight for legal abortion and OPEN MORE CLINICS NOW! An abortion clinic at every University of Minnesota campus across the state would greatly increase the capacity of our state to meet the growing needs for these procedures and strengthen our status as a sanctuary state!” 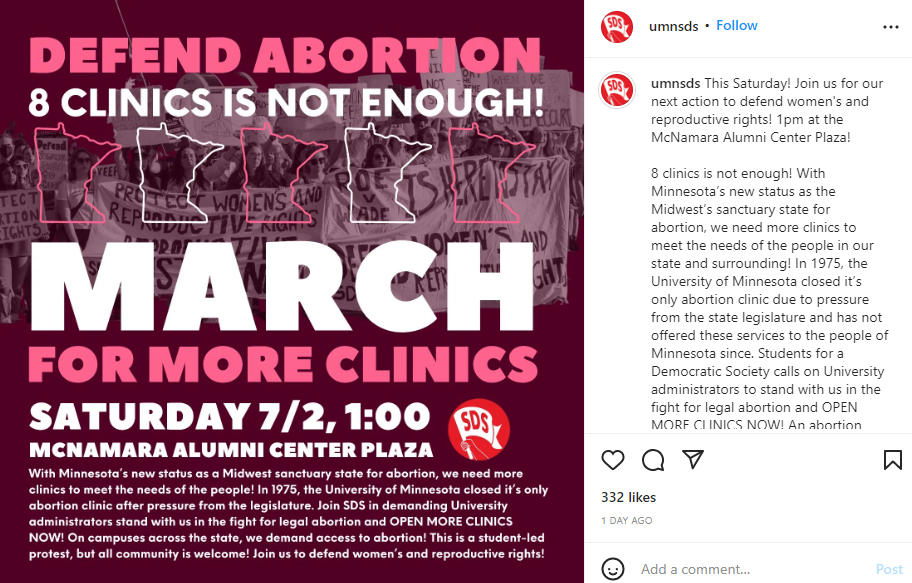 “We won’t accept this decision quietly; we will take to the streets and FIGHT BACK,” the Tallahassee-based chapter wrote. 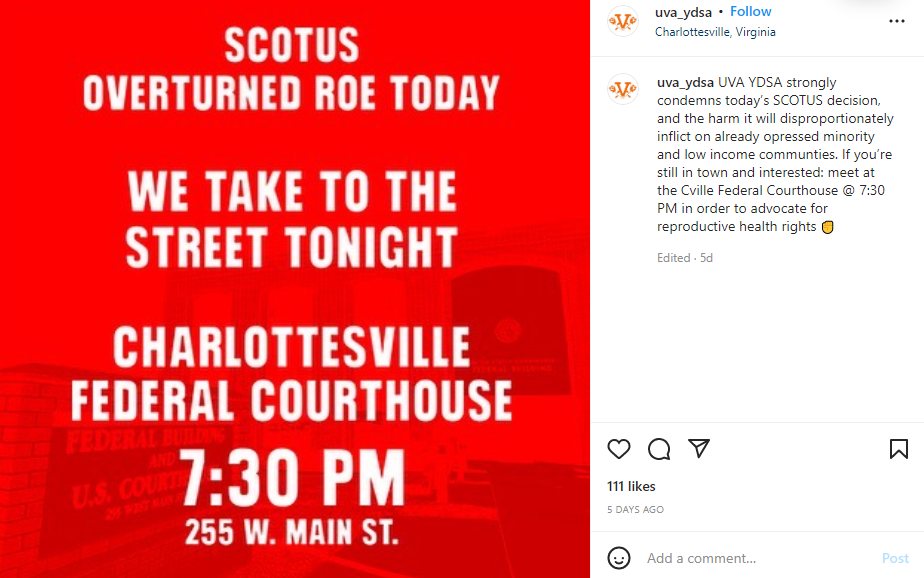 The Northeastern University of Massachusetts YDSA chapter called in an emergency protest June 24 in response, and the University of California, Santa Barbara chapter held a vigil in response to the decision.

“Today is a dark day for the right to bodily autonomy in this country, but perhaps now more than ever, we need you out in the streets,” the chapter wrote. 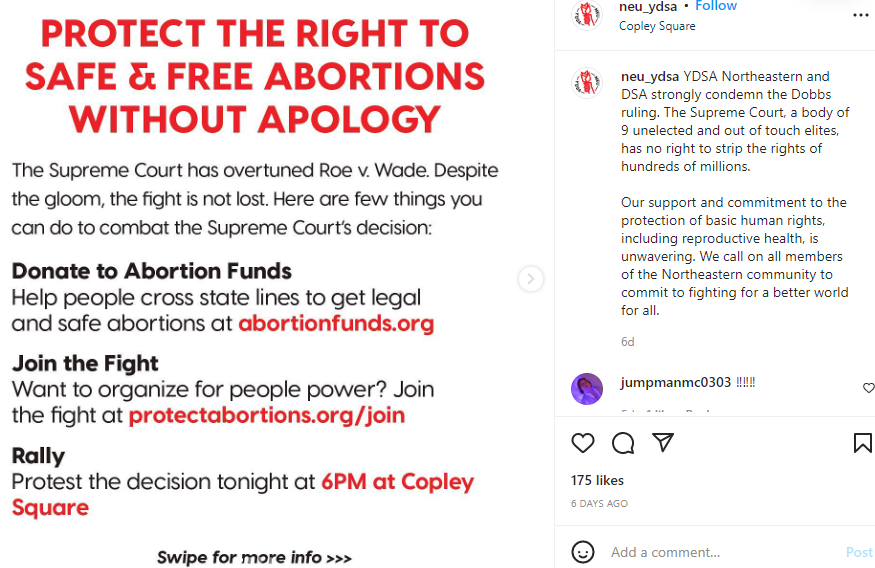 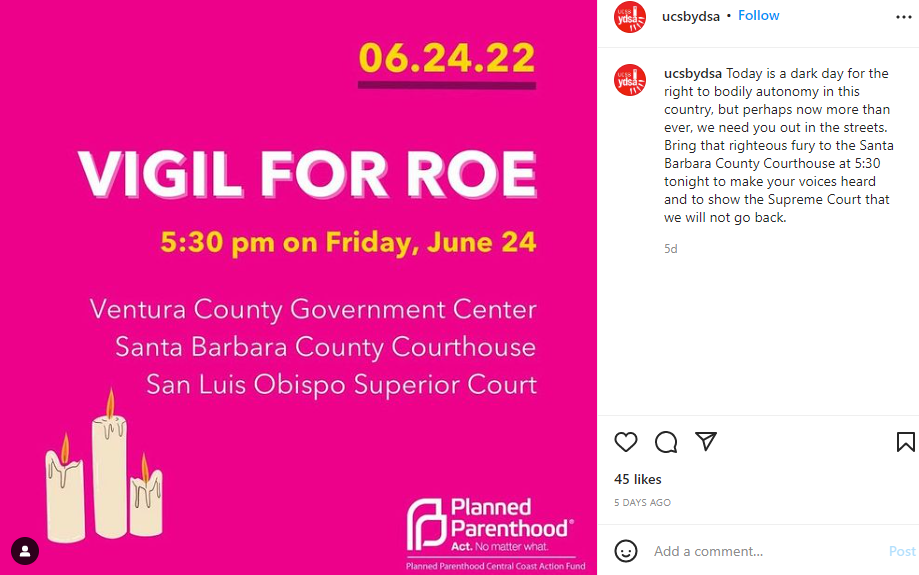 UCSC YDSA Executive Committee told Campus Reform that the “ dismantling of abortion rights by the far-right and Christian nationalists could be just the beginning of future right-wing attacks on landmark decisions that rely on the right to privacy.”

However, nothing in the Court’s Roe v. Wade opinion “should be understood to cast doubt on precedents that do not concern abortion,” Alito wrote.

Florida International University (FIU) YDSA rallied for “the fight for… human rights” on June 27 where they accused “religious extremists of the GOP” of corroding democracy.

“There’s an easy solution to the problem honestly; a simple solution that could be solved with the simple practice of safe sexual [activities],” he told Campus Reform. 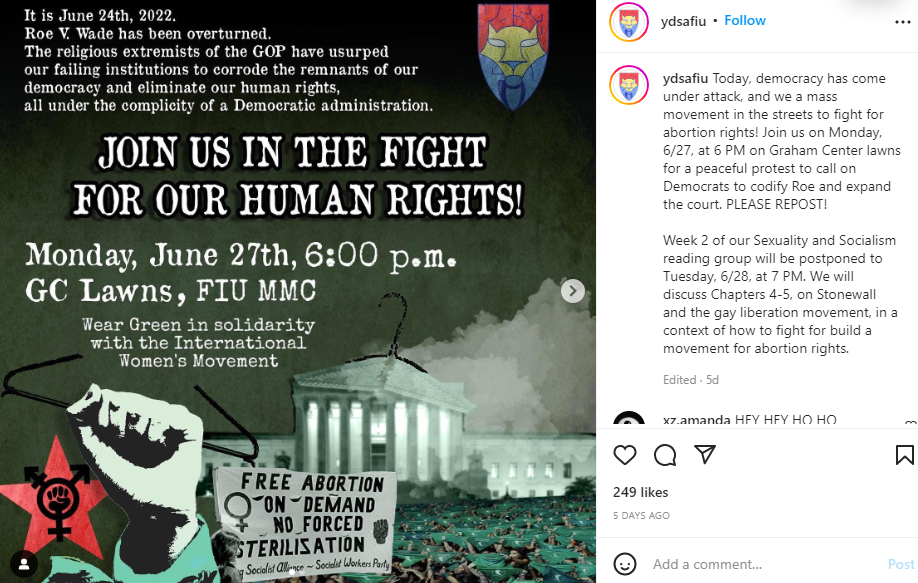 The University of Minnesota YDSA announced it would partake in the “Our Future: March for Abortion Access” protest on July 17, and the University of California, Irvine promised to organize demonstrations.

George Mason University YDSA and Oakland University PPGA posted a link to an interactive map, titled “We Won’t Go Back,” which features protest locations across the country.

Campus Reform contacted every chapter and university mentioned. This article will be updated accordingly.