'My family fled communism in Eastern Europe and...wanted for his future children to have the freedom to live in a free country and to not be afraid of my beliefs,' a student told Campus Reform.

Costescu's NeW chapter set up 1,000 red flags and six posters on the Washington, DC, campus to commemorate Victims of Communism National Memorial Day, which is observed on Nov. 7. Costescu discovered earlier today that all six posters were spray painted with the red communist hammer and sickle symbol.

Jessica Costescu: [I]t's the National Memorial Day for the Victims of Communism.

KA: Was this with a specific chapter at Georgetown?

JC: I'm the president and co-founder of our network enlightened women chapter on campus, which is basically just a club for conservative women, but this was a co-sponsored event with our College Republicans chapter.

KA: [W]hen were your signs put up?

JC: Yes. So we put all the flags up. The flags are still there. And we have six poster boards that we put up starting at 8 am this morning, but I would say we probably got done around like 8:30 am in the morning.

KA: [T]he point was to try and bring about awareness for what this day means for people, correct?

JC: Yes. So essentially, it was not a political statement whatsoever. [W]e called it just "Communism Kills" to remember and memorialize the victims that died under communism and continue to suffer under communism. All of the facts that we had and all six poster boards either had to do with saying that today's the day that we should be doing this and that one flag equals 94,360 lives that were lost or to communism, or there's another one that just said you know, that there was 60 million that have died in under Chinese communism or like in the USSR, so it was all basically just facts. It was nothing political or partisan. Nothing whatsoever like that.

KA: [C]an you walk me through what happened from when you first found out like, how did you find out that there was vandalism with these signs and then all the way to seeing them?

JC: I went back to my dorm, after the event, I went to get breakfast with a lot of the students that helped set up the flags and everything, and then I just went back to my dorm, because I thought that was it. We were just going to pick up all the flags and everything else at 6 pm. So the flags are still there. We did not take them out. But one of my friends that just happened to walk by the front of campus called me around like 10:30-10:40 and told me that it looks like someone had vandalized all six posters and they had spray painted a red sickle and hammer on every single one of them. Which is crazy because at 10:30 in the morning and at the front of Georgetown University it's very busy, there's many people, so this happened where many people were around. I'm surprised how no one else like really caught on to this, or said anything, or tried to stop them, or didn't care. [I]t's just insane when it was so clear that this was simply a memorial and it was nothing more than that.

KA: So then when you found the signs was anybody around?

JC: [Y]eah, there were two girls there but I mean, I'm sure they probably didn't know why I was taking...the posters out because it looked like it had become a pro communism. display. So of course, like I had to take all six posters out. And there may be like a couple students that didn't know why I was taking them out. They might have thought that I was the one that put the spray paint there but I explained that I was obviously really discouraged that this had happened and you know, I didn't know who did it.

KA: [D]o you have any idea who would have done it? Is there...a pro communism club on campus? Like is there anyone you kind of know that's affiliated with those ideas?

JC: No, I don't think there's any point in me trying to point a finger to people that I don't have evidence that they did it or not. I know for a fact that we've had roundtable discussions on Marxism on campus, so I definitely can think of people that are sympathetic to the communist ideology, but I can't point any fingers to any individuals that did this. But it's just insane because someone clearly saw it, didn't like it, went back to their dorm, got a can of red spray paint because no one really carries that on them. They went back and did this in full view at 10:30 in the morning, so the display didn't even last two hours. 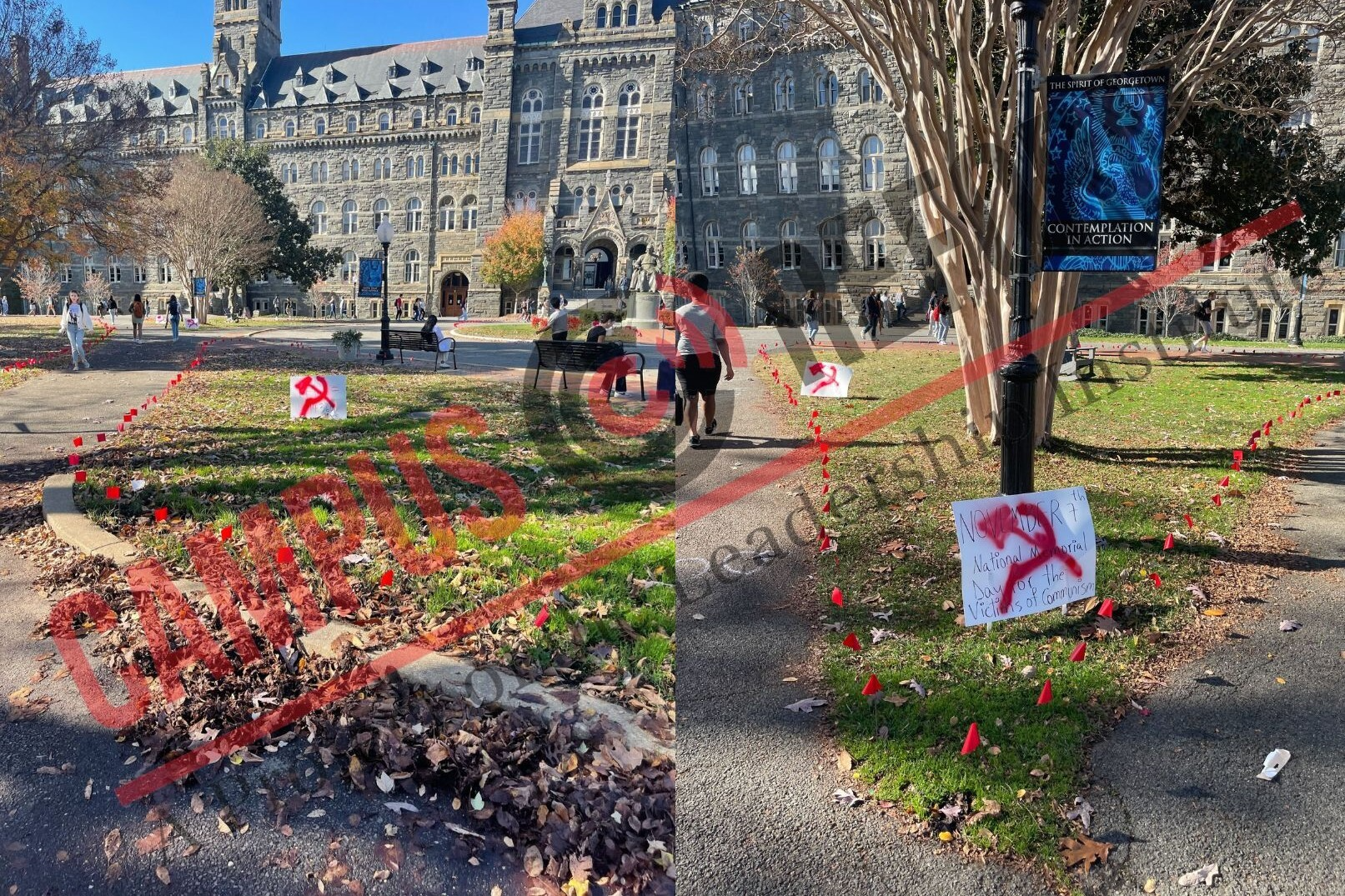 KA: [I]f you did know who they were, what would be your message to them after they spray painted these signs that are supposed to be memorializing actual victims?

JC: I think it's very, very discouraging and sad because personally my family fled communism in Eastern Europe and my dad wanted for his future children, for me, to have the freedom to live in a free country and to not be afraid of my beliefs. And it's very sad because all of these students, they go to Georgetown University, which is one of the most prestigious universities in the country, and it's just insane to me, that you can go to such a university that is supposed to be one of the best in the country. So what are you actually learning in your history classes? What are you being taught? If a simple poster that says that communism kills which it does and continues to do? How can that enrage you? [I]t doesn't make any sense. I think our universities are just not doing a good job at all, and that this is clearly allowed to happen because I mean, I can't think of any conservative ever doing something like this to one of their memorials, but this happens to us and it doesn't even take two hours for it to happen.

KA: Do you plan on talking to the university about it at all?

JC: Absolutely. I plan on pursuing all action necessary to make sure that the university acknowledges that this not  only shouldn't have happened, but this should not happen in the future. It is not acceptable behavior, because they talk all the time that...this is a campus for free speech, but it really isn't.

KA: Yeah. And just to follow up on that, was this an event that you had to have university permission for?

JC: Yes, we got all from all sorts of permission. We had reserved the Healy lawn which is the actual green space in front of the university. We reserved the entire thing. [W]e used only probably around 25% of the actual lawn. We had the university approval, we had approval from our Student Activities Commission. From our from sets, which is the campus events management so that's how we coordinated it and I went back and forth with them. They wanted to make sure we could have like tables or chairs if we needed but it wasn't anything like that. It was just a flag display. So yeah, we had all sorts of approval. We were supposed to be there and this was not supposed to happen.

KA: Was there anything else you can think of that you wanted to mention?

JC: I mean, just personally, I may or may not have teared up earlier. Yeah, it's just because it's very personal to me. [M]y father fled communism, and he, you know, after he fled, he was caught he was put in a communist labor camp in [Yugoslavia]. He was there for two years he was beaten, starved, and eventually made it to the US so I could be here. So it's, it's insane to me that not only could a person believe in such an ideology, but also have something against me for wanting to do something nice for the people that continue to suffer under this and the people that lost their lives to this. It's just very personal to me, and it's just very sad.