A South Carolina pro-life summit was sabotaged with the use of fake flyers, multiple sources told Campus Reform.

The accused group is the University of South Carolina Socialists.

A pro-life event in South Carolina was allegedly sabotaged by protestors after fake flyers were created to turn attendees away, multiple sources told Campus Reform.

The South Carolina Student Life Summit hosted attendees state-wide on Jan. 7 to “educate & equip the Post-Roe Generation,” according to the event’s website.

The summit consisted of pro-life exhibits, a march, and speeches from pro-life advocates. However, the event did not start off smoothly.

According to multiple sources, pro-abortion protestors created fake flyers to turn people away from the event.

Campus Reform obtained a photo of the flyer in question, allegedly spreading misinformation about the event’s location and timing. 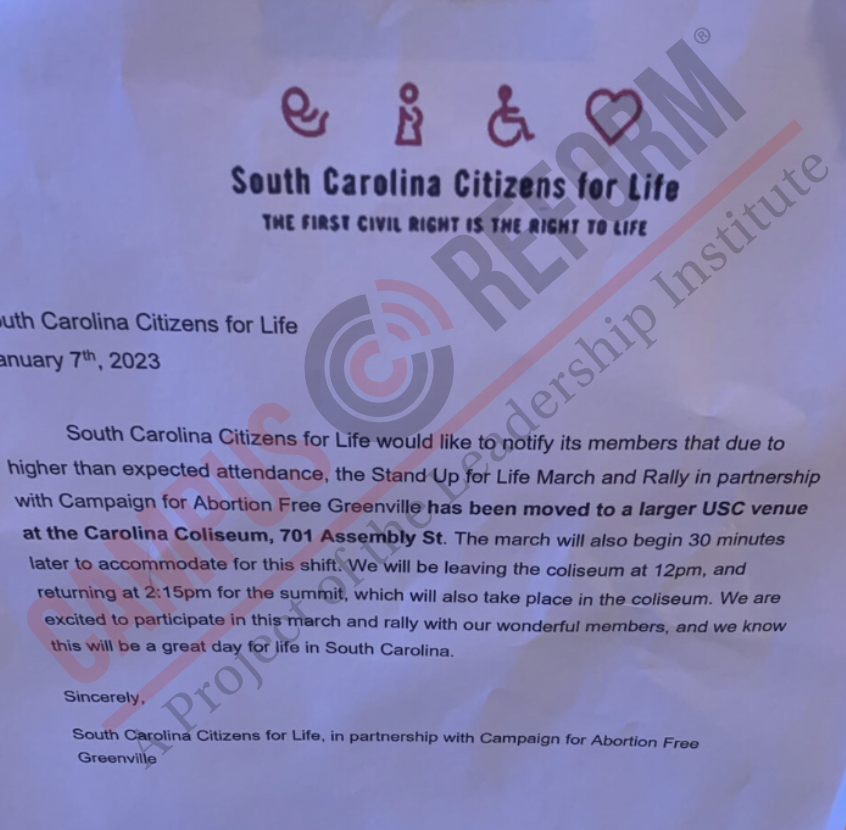 “South Carolina Citizens for Life would like to notify its members that due to higher than expected attendance, the Stand Up for Life March and Rally has been moved to a larger USC venue,” the flyer reads in part.

It then reads, “The march will also begin 30 minutes later to accommodate for this shift.”

Chloe Davis, who was heavily involved with the summit, explained to Campus Reform her belief that the group responsible for the fake flyers is a group called the University of South Carolina Socialists (UofSC Socialists).

The accused group recently posted an Instagram announcement encouraging others to join them at the South Carolina Student Life Summit. “Let your voice be heard,” the post read.

“The socialist group completely stole the logo of the group SC Citizens for Life when they printed the fake flyers,” Davis told Campus Reform. "I don’t know if there’s any way to get them in trouble for stealing and using a logo without permission, but if there is I would love to see them held accountable for their actions.”

When asked if she was surprised about the fake flyers being created, Davis said, “Honestly, I’m not surprised. These were put up by people who support a movement that is founded on lies and deception. Thankfully we got all of the flyers taken down and we had a wonderful turnout.”

Event attendee Macy Petty agreed that the U of SC Socialists sabotaged the summit.

According to Petty, “[the protestors] all got here super early to tell everyone it was moved to another location.”

Although the protestors caused trouble, Petty told Campus Reform that the pro-life advocates “gave them donuts and drinks and stuff all day long despite them being jerks.”

Another event attendee, Josiah Sullivan, confirmed that the flyers were fake.

“I took a picture of [the flyers] around the entrances of the building we were hosting the event. I circulated the photo I took that morning and verified with our group that they were faked,” Sullivan told Campus Reform.

“I also observed one of the protesters placing them on stands in their various locations,” he added.

In response to the protestors, Sullivan said, “If their best form of protesting is to pose as us then that makes them childish in my opinion.”

Campus Reform reached out to every individual and institution mentioned for comment. This article will be updated accordingly.