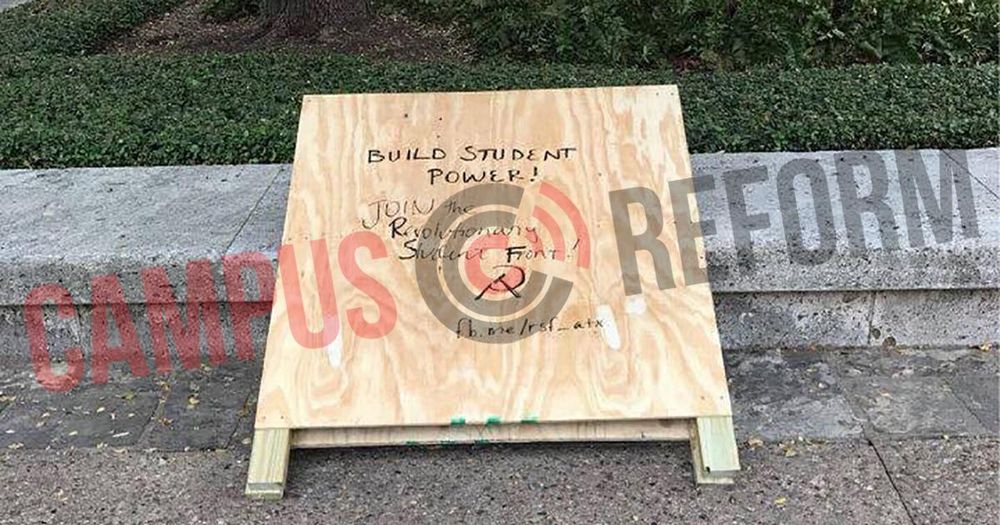 A University of Texas at Austin student group that advocates armed revolution to overthrow “the capitalist state” revealed that its Twitter account was suspended for “promoting violence.”

The “Revolutionary Student Front” (RSF) describes itself as “a revolutionary anti-capitalist student movement,” defining its beliefs with five “Points of Unity,” specifically “anti-capitalism,” “revolution,” “anti-oppression,” “anti-imperialism and internationalism,” and “the mass line” (a tactic of using “revolutionary theory” to “sharpen” ideas that come “from the people”).

The group urges people to join if they agree with those points, “no matter what your political tendency.”

The manifesto begins by condemning capitalism as a system that “oppresses and exploits” people for the benefit of “a small ruling class.”

“Under capitalism, those in power value profits over human lives and the future of the planet,” the page declares. “We want to overthrow capitalism and replace it with a system where the people who produce the world’s wealth will enjoy the full benefit of that wealth and the people who make the world run will decide how it is run.”

Insisting that this cannot be accomplished through normal democratic processes, the group calls for a “revolution” against both capitalism and “the pillars that uphold capitalism,” which it defines as “patriarchy, white supremacy, and ableism.”

“It is right to rebel!” the page concludes.

In periodic blog posts, the RSF repeatedly employs the language of political violence to describe the “revolution” against capitalism that it desires.

The most recent post, for instance, emphatically declares that “our organization subscribes to the idea of working class revolution–a revolution which takes up arms in rebellion against the capitalist state and its various institutions, including the universities” [emphasis in original].

Earlier this month, the organization published a 13,000+-word document discussing its Revolutionary Mental Health Program (RMHP), which was was created because the group “sought to determine a site of struggle that would appeal to the sections of the student population most ripe for radicalization and to develop a plan to address those needs in a way that would politicize these students, with the goal of course being to make them into active fighters in the revolutionary class struggle.”

While the program was abandoned in 2017 after the group determined that it was “rooted in an incorrect theoretical understanding and subsequent misapplication of [their] fundamental principle of the mass line,” the Revolutionary Student Front says it is now reorienting its efforts “toward drawing in fighters who are ready to physically and mentally engage in the class struggle and are healthy enough to carry on this fight continuously.”

The group’s Twitter account--which had been suspended as of press time--was even more explicit in its advocacy of violent revolution, according to The Daily Caller.

“Bricks belong best thrown at pig heads!” one tweet proclaims, while another asserts that “white supremacy is at the heart of American values.”

The group acknowledged that its Twitter account has been suspended on its Facebook page, saying it does not expect the account to be restored “on the grounds that we are breaking their Terms of Service by ‘promoting violence against a group of people [capitalists].’”

“To me, behavior like this from RSF is to be expected,” Saurabh Sharma, the director of events for Young Conservatives of Texas chapter at UT, told Campus Reform.

“Cult-like ideologies that seek to make the singular purpose of their members the advancement of an ideology often prey on those in times of crisis,” she noted. “RSF attempting to lure in students who are suffering from mental health crisis shows the classic pattern that cults follow, break someone down, then build them back up in the image of the cult.”

Campus Reform reached out to the RSF, which declined to comment other than to affirm that its blog posts accurately reflect the group’s views.

UPDATE: J.B. Bird, UT's director of media relations, told Campus Reform that the RSF is not officially recognized by the university, and lacks authority to host events on campus such as the "Community Self-Defense Class" that it recently advertised.

Bird also addressed the group's frequent advocacy of violence, noting that "threatened or actual violent conduct against a person is against university rules and counter to the university's values."