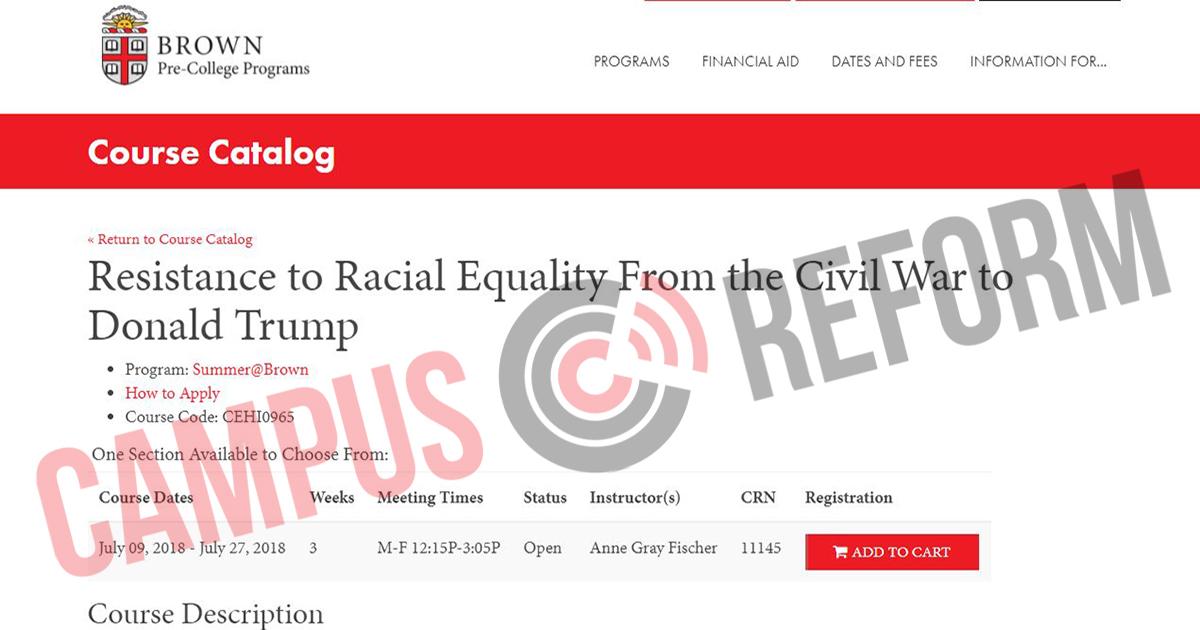 Brown University will soon offer a course on the “whitelash” that supposedly caused President Trump’s election as part of its pre-college program for high-schoolers.

The course, titled “Resistance to Racial Equality from the Civil War to Donald Trump,” will examine the racial elements of Trump’s election, which it calls a “whitelash,” meaning a “staunch white resistance to, and even revenge against, racial equity.”

"In this course, students will explore the history of white resistance to racial equity in the U.S."

It is one of hundreds of courses offered during Brown’s annual “Summer@Brown” program, which offers prospective students a three-week on-campus experience at the price of $5,966 for residential students and $4,214 for commuters.

“Without the pressure of formal grades and credit, students can immerse themselves in subjects they choose and experience the satisfying challenges of college-level academics,” a description for the program explains, inviting students to choose from a selection of at least 220 courses, including one on “fake news,” and another on Critical Race Theory.

“After the two-term presidency of Barack Obama--the first black man to hold that office--was the election of Donald Trump a surprise? To many people, it was,” the course description begins, saying that for those who “believe in this story of consistent racial progress, Trump’s successful campaign, fueled as it was by white nationalist supporters, was very surprising.”

“In this course, students will explore the history of white resistance to racial equity in the U.S., from the end of the Civil War to the hotly contested debates over Civil War monuments in our contemporary moment,” the course description adds. “As we study the struggle for black freedom in this country in the long twentieth-century and into the present day, we will encounter and discuss the logics and tactics of white opposition.”

As a result of taking the course, students will develop “a toolkit of critical methods of inquiry and communication that is readily transferable to their everyday lives and future collegiate careers.”

“By the close of the course, students will be fluent in the major terms, concepts, and debates in the U.S. history of race relations,” the description continues, asking interested students to “bring a spirit of generous curiosity, good faith, and mutual respect in order to co-create an inclusive space of shared inquiry.”

Campus Reform reached out to the university for comment on the matter, but did not receive a response in time for publication.