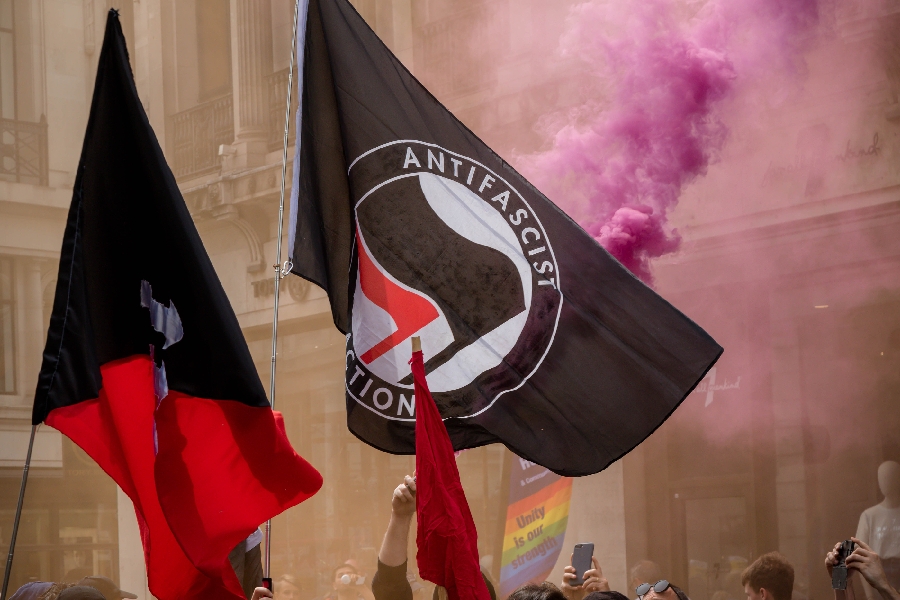 A Seattle Times columnist quoted a professor as saying that he takes no issue with the violent Antifa attack in June against journalist Andy Ngo that left him with serious injuries.

Pacific Lutheran University Professor of Nordic Studies Troy Storfjell was recently interviewed by a Seattle Times columnist regarding his membership to a group called Emerald City Supporters, a band of local Major League Soccer fans who recently won a battle with the league for the right to display the Iron Front Symbol at matches.

The symbol, which is regarded widely as a symbol of "anti-fascism" and as such has been co-opted by Antifa groups, was banned from stadiums as it was deemed to violate a policy against political imagery, but the ECS claimed the image is not political in nature, and simply stands for inclusion.

Storfjell was interviewed before the league lifted the ban, telling Seattle Times columnist Matt Calkins that the league was at risk of losing many local supporters should they choose not to let the group display what has come to be recognized as an Antifa symbol at soccer games.

When asked by Calkins what he thought about Antifa adopting the symbol, Storfjell replied: "I say hell yes."

When specifically asked about Ngo, who suffered a brain hemorrhage as a result of a violent attack while covering Antifa demonstrations in Portland, Ore. in June, Storfjell replied by saying  "...I don’t have a problem with it. There are children dying of lack of medication in concentration camps in the U.S. If one fascist gets a milkshake thrown at him…."

When the columnist pointed out that Ngo was also "beaten up," Storfjell clarified “And beaten up. I don’t have a problem with it.”

Later in the interview, audio of which conservative commentator Jason Rantz posted after he says he requested it from Calkins, the professor says "personally, I would never strike first," but then adds, "I don't have a problem with people striking first in certain situations."

At another point in the interview, the professor says that one must use "situational ethics" to determine whether to initiate physical violence against someone deemed to be a fascist.

Storfjell also says, “Is it okay to punch a Nazi? Yes, because Nazism fascism is violence, right? [It’s] advocating extermination of people."

Storfjell did not respond to multiple requests for comment from Campus Reform. He told Rantz, “Given the way I was creatively quoted and mis-framed in the newspaper article, I am uncomfortable making further statements to the media.”

Calkins commented on his interview with Storfjell in a statement to Campus Reform Wednesday night, saying, Storfjell "did seem genuine."

"I don't want to say he seemed sinister, but I think he really believed that violence against certain groups was necessary to defend basic freedoms," Calkins said.

[RELATED: Prof: Antifa sympathizer set to speak on 9/11 anniversary 'at the campus where I teach']

On Tuesday night, the professor tweeted, calling Ngo a militant fascist," insisting that he "is no journalist," and rejecting the premise that he should "feel sorry" for Ngo's being targeted by Portland activists.

When Campus Reform contacted Ngo for comment, he referred inquiries to his attorney, Harmeet Dhillon.

In a statement to Campus Reform, Dhillon said, "It’s incredibly disturbing that this person is in a leadership position and able to influence and shape the minds of young students, given the vicious and defamatory lies that flow with ease from his pen onto Twitter."

"Falsely painting a journalist (yes, Andy is a journalist – we don’t need a license in America – yet – to practice the First Amendment and to share uncovered truths with the public) as a 'militant fascist' is a tactic straight out of Saul Alinsky’s Rules for Radicals, and it justifies violence against the journalist or fellow citizen as well as inviting further violence against him," Dhillon said.

"This personalization and spreading of a false, political narrative is reprehensible and irresponsible," she added.

PLU did not return Campus Reform's request for comment but told Rantz, “PLU is, and always will be, committed to nonviolent civic participation, patient and empathetic dialogue, and an ethic of caring — even, and perhaps especially, across cultural and political differences.”