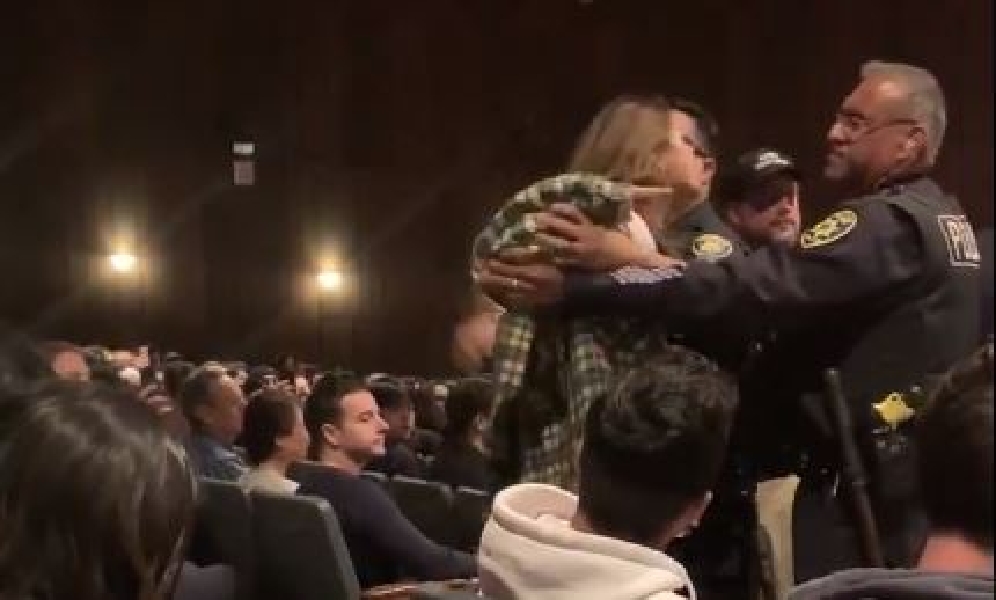 It was a night full of tension and chaos.

At the University of California-Berkeley, students lined up to hear conservative commentator Ann Coulter speak at an event hosted by the College Republicans. But hundreds of more students showed up not to hear Coulter, but to be heard.

"shut down Ann Coulter and make her cancel her own event."

Video posted to social media both inside and outside the venue shows just how tensions ran between attendees and protesters, as law enforcement officials in most cases formed lines to separate the two groups.

According to UC-Berkeley Police, "multiple masked protesters [were] arrested."

Protesters surrounded Wheeler Hall, the venue in which Coulter spoke. Chants of "No Coulter, No ICE, Berkeley is a sanctuary," "Ann Coulter wants ethnic cleansing, we say no," "racists go home," as well as calls to "shut down" Coulter broke out. In one video posted to social media, an individual is heard shouting, “Get the f**k out of here, bitch!”

“Berkeley is a sanctuary. No Coulter, no ICE” protesters chant in front of Wheeler Hall #Coulterprotest pic.twitter.com/qpsyhpO2PE

"Racists Go Home" -- On the barricades at UC Berkeley against Ann Coulter. Students are determined to keep people from entering her fascist speech targeting immigrants. pic.twitter.com/r0o8h5iAOi

Hundreds of demonstrators at UC Berkeley are protesting a speech by @AnnCoulter. pic.twitter.com/jjtTYcAuuA

“Get the f— out of here, bitch!” Far-left protesters block and scream at woman attempting to get to Wheeler Hall for the @AnnCoulter event. #antifa pic.twitter.com/xroAvCWT9l

KPIX-TV spoke with a protester who explained two goals, one of which was "to shut down Ann Coulter and make her cancel her own event."

Coulter arrived at the venue surrounded by security as onlooking protesters shouted, "f**k you bitch."

Another video posted on social media shows protesters physically blocking attendees from entering the venue where Coulter was to speak. According to one tweet, attendees eventually turned back after being unable to get past a human blockade of protesters.

Protester physically block a couple from entering the #Anncoulter event at #WheelerHall in #UCBerkeley. pic.twitter.com/kFNRhspXa8

Out Now! Right Now! Period! On the barricades at the protest at UC Berkeley Against Ann Coulter. pic.twitter.com/3oRMhY5OQL

@KTLA in regards to the Ann Coulter Protest at UC Berkeley pic.twitter.com/yeIDixQ637

[RELATED: EXCLUSIVE: No conservatives have been UC Berkeley commencement speakers in past 10 years]

Yet another tweet shows police escorting one individual away from the protesters as one person shouts "where are you taking her? What did she do?"

Another individual was also recorded being escorted away by police as protesters shouted, "let him go."

@KTLA in regards to the Ann Coulter Protest at UC Berkeley pic.twitter.com/yeIDixQ637

Inside the venue, similar chaos erupted, as security escorted one individual out of the event as she held up both middle fingers toward the stage and shouted, "You are a f**king nazi, Ann."

Campus Reform obtained video of who appears to be the same individual who was escorted out of the venue sitting on the floor outside the room surrounded by police calling them "f**king pigs."

Following the event, as attendees exited the venue, police lined up between the attendees who were filing out and protesters shouting at them.

University police are guarding the way as attendees leave Ann Coulter speech at UC Berkeley. Protesters and attendees are filming each as they leave. pic.twitter.com/K7KVkLliJv

In a statement to KPIX-TV, Assistant Vice Chancellor for Communications Dan Mogulof said, "We value the First Amendment. We value the independence of our student organizations. We value the diversity of opinion for our community members, the public, and our guests."