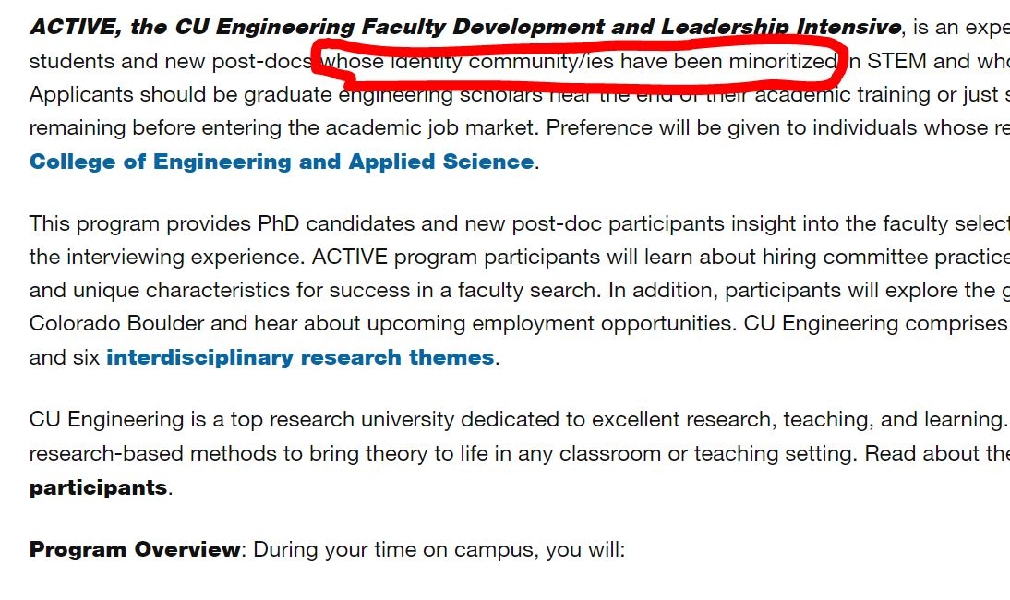 The University of Colorado-Boulder hosts a three-day career advancement retreat, open only to STEM graduate students with "minoritized" identities.

The annual three-day program is geared toward STEM students who are interested in careers as university engineering faculty and provides students "insight into the faculty selection and hiring processes" to "demystify the interviewing experience." However, applications are only welcome from individuals "with at least one minoritized identity that is underrepresented among engineering faculty nationwide." Qualifying "minoritized" identities include  "race/ethnicity, sexual orientation, gender identity, socioeconomic class, veteran status, ability."

“Supporting all individuals who wish to pursue STEM careers is not just the right thing to do, it’s the smart thing to do..."

Activities at the event were centered around career development and networking, and not specific to minority experiences. They included creating research and teaching portfolios, coming up with questions to ask during interviews, networking with existing CU faculty, and learning the differences between types of faculty careers.

“Our goal at the CU Boulder College of Engineering and Applied Science is to be the first public engineering college with 50 percent women in the undergraduate population while reflecting the demographics, including those of underrepresented groups, of our state’s high school graduates," University spokesman Phil Larson told Campus Reform, adding that "This goal is part of the College’s 2017 strategic vision that was written in a collaborative process that included students, staff, faculty, parents and members of the public."

"We are also working to build diversity among our grad students, faculty, and staff at CU Engineering. For the past two years, our College of Engineering and Applied Science has invited doctoral students, i.e. potential faculty, to visit the University of Colorado Boulder campus to learn more about careers in higher education,” Larson added.

“This leadership development program attracts the top doctoral candidates from around the United States – 13 universities to be exact – and from a wide array of backgrounds and research interests. Overall the program requires less than 1 percent of our graduate and faculty recruitment program’s budget,” said Larson, adding that “Supporting all individuals who wish to pursue STEM careers is not just the right thing to do, it’s the smart thing to do for our country’s economic competitiveness and national security.”

But this particular CU program does not welcome "all individuals who wish to pursue STEM careers,” as Larson suggests. Instead, it is only open to individuals "whose identity community/ies have been minoritized in STEM."

Larson directed Campus Reform to over a dozen other similar programs around the country, some of which were specific to female applicants, and some of which admitted to having minority students as a target audience, but none of which excluded non-minority applicants.