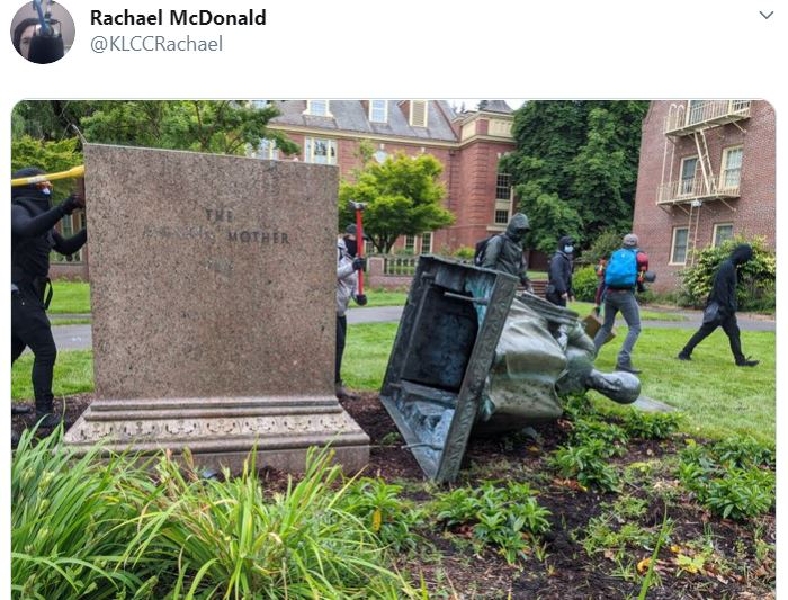 One university has suggested that decisions about campus monuments should be made by the college community and not through acts of vandalism.  On Saturday, two historic statues were forcibly removed from their pedestals on the campus of the University of Oregon.

The act took place following a rally coordinated by the BIPOC (Black Indigenous People of Color) Liberation Collective, although the Eugene Weekly reports that the perpetrators have not been identified, nor whether they were affiliated with a specific group.

“While we support peaceful protest and vigorous expression of ideas, we do not condone acts of vandalism"

The same evening, the university issued a statement decrying the act.

“While we support peaceful protest and vigorous expression of ideas, we do not condone acts of vandalism,” the school wrote. “Our country, state and campus are coming to terms with historic and pervasive racism that we must address, but it is unfortunate that someone chose to deface and tear down these statues.”

The statues at UO have previously been the subject of controversy; the Pioneer Father, anonymously vandalized in 2019, is a particular target. Building names have additionally been called into question, specifically Deady Hall and what was then Dunn Hall.

Schill advised for the renaming of Dunn Hall, but not Deady Hall, saying “one of the things I was very, very focused on was, we shouldn't hide history. Even the history we’re ashamed of. And if we hide history, we’re doomed to repeat it. So what we need to do is understand how we got here — understand the good and the bad.”

According to Oregon’s statement, Schill has now asked for Deady Hall to be renamed, and he has spoken to a campus committee about the possibility of removing statues and monuments. But the university emphasizes that this change should not be brought about by violence.

“Decisions about the future of the Pioneer statues and other monuments should be made by the campus community through an inclusive and deliberative process, not a unilateral act of destruction,” OU said.

For now, the statues will remain in storage. They will not be returned to their prominent pedestals, Schill announced in a statement Monday.

He restated that “what happened Saturday evening was unacceptable” and hopes to “work with our museums to explore permanent installations or other opportunities to exhibit the statues in a manner that places them in appropriate historical context.”

“These are incredibly difficult times,” Schill wrote. “Removing or relocating a statue or a piece of art does not change the need for the hard work of confronting racism that is ahead of us as a nation, a state, and a university.”