Carnegie Mellon students painted “Black Lives Matter” on the school’s Fence, which is a tool for students to display art and free expression publicly.

After students reverted the Fence to read “Black Lives Matter,” the university commended them and called “All Lives Matter” a “controversial message.” 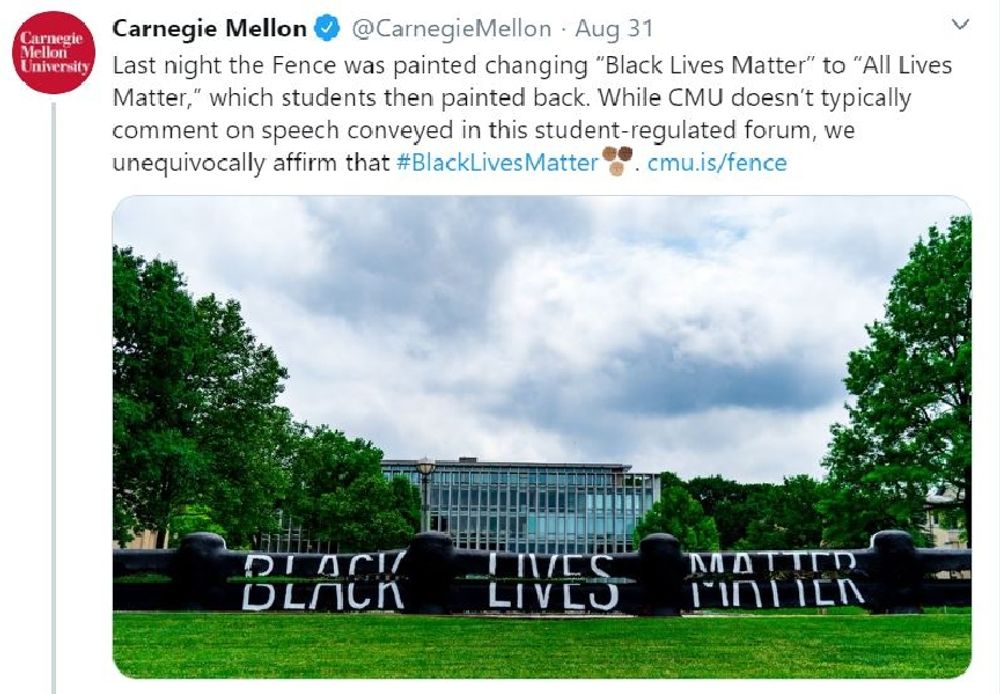 Carnegie Mellon University’s Fence, which allows students to display messages, art, and other expressions, included the phrase “Black Lives Matter,” which someone later modified to read “All Lives Matter.”

someone fucking did this to the Fence like are you serious i — WHY. pic.twitter.com/3nWtSwl3ai

Students then reverted the message, earning the praise of the university, which called "All Lives Matter" a "controversial message."

Last night the Fence was painted changing “Black Lives Matter” to “All Lives Matter,” which students then painted back. While CMU doesn’t typically comment on speech conveyed in this student-regulated forum, we unequivocally affirm that #BlackLivesMatter. https://t.co/YDGOgqf2ow pic.twitter.com/EfPDs9YwlL

According to an official statement by the university, the school does not typically manage the Fence or interfere with its content. However, it said the university is proud that its students “have managed this situation in keeping with... Carnegie Mellon’s culture and values” by removing the phrase “All Lives Matter.”

“The University does not typically comment on the speech that is conveyed on the Fence,” said the statement. “However, as anyone who has followed our efforts this summer knows, CMU believes and unequivocally affirms that Black Lives Matter.”

Students and social media users were not satisfied with Carnegie Mellon’s statement.

“How does this jive with hiring Richard Grenell?” asked one Twitter user, referring to President Donald Trump’s former acting director of national intelligence and his appointment to CMU’s Institute for Politics and Strategy.

[RELATED: Of course Black lives matter, but BLM is a disaster]

“So can we expect the perpetrators to go through the conduct process for vandalism?” asked a student.

So can we expect the perpetrators to go through the conduct process for vandalism?

CMU did not return a request for comment for this article.