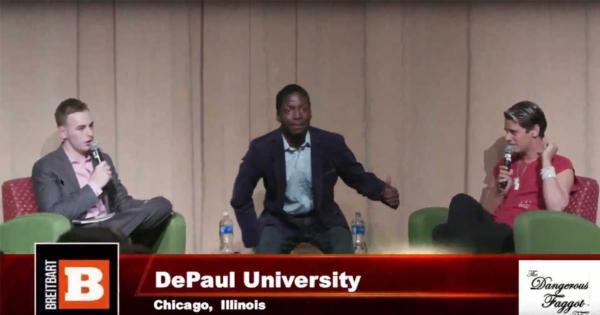 DePaul University has removed the ratings function from its Facebook page following a torrent of one-star ratings from people enraged by the school’s handling of a recent Milo Yiannopoulos lecture.

Breitbart reports that DePaul quietly removed the feature over Independence Day weekend, possibly in an attempt to minimize fallout from the decision while the university works to restore a reputation damaged by more than 7,000 negative reviews.

“Wow. This university doesn’t care at all about free speech and has no interest in education.”

During an appearance hosted by DePaul’s College Republicans chapter in May, Yiannopoulos was threatened by Black Lives Matter protesters, who stormed the stage and forcibly commandeered the microphone. The protesters continuously berated Yiannopoulos throughout the event, eventually driving him to lead his supporters on a march across campus to the president’s office.

Despite the presence of extra security, which Breitbart paid for after DePaul sprung the requirement on College Republicans at the last minute, uniformed guards stood idly by while the protesters aggressively shouted down every attempt at discourse and periodically made threatening gestures toward Yiannopoulos.

Yiannopoulos was scheduled to speak at DePaul again this fall, but according to The DePaulia, the university sent an email to College Republicans Thursday denying their request for a venue, claiming that Milo’s “inflammatory speech” contributed to a “hostile environment” and that DePaul would not be able to provide the extra security required for hosting Milo again.

“Mr. Yiannopoulos’ words and behavior contained inflammatory-speech, contributed to a hostile environment, and incited similar behavior from the crowd in attendance,” Vice President of Student Affairs Eugene Zdziarski explained in the email. “In addition, he led an unapproved march through campus that created a potentially dangerous situation.”

After Yiannopoulos’ first visit, DePaul president Rev. Dennis Holtschneider issued a half-hearted apology letter from Normandy, France accusing Yiannopoulos of being a “self-serving” provocateur who is “unworthy of university discourse,” and comparing the protesters who disrupted his speech to the soldiers who fought at Normandy on D-Day. Holtschneider resigned shortly thereafter, but denies that the Yiannopoulos controversy was a contributing factor.

After the details were released, DePaul’s ratings page was overwhelmed with over 7,000 one-star ratings by disgruntled people who were appalled by the lack of security intervention despite the apparent need for it, as well as the University’s clear attempts to chill free speech.

[RELATED: DePaul BLM leaders: Milo made us do it]

“Wow. This university doesn’t care at all about free speech and has no interest in education. Not only was a speaker attacked by a mob while security looked on (administrators ordered them to), but the president’s ‘apology’ was 80% defending why the mob had a right to be upset and why the speaker’s views were wrong” wrote one user in a one-star review before the ratings section was disabled and censored entirely.

Now, when trying to access the ratings page, an error message appears.

As a makeshift for the ratings page, Facebook users who are dissatisfied with the University’s actions during and after Yiannopoulos’ visit took to DePaul’s Facebook wall, where one user writes “Never let DePaul have peace until they acknowledge their hateful and corrupt behavior towards Milo.”

UPDATE: The DePaul College Republicans released the following statement on its Facebook page excoriating the university's decision, saying it sets a chilling precedent that a person's speech can be shut down if there is sufficient opposition to their views. The CR's reject DePaul's "contemptible response" and vow that they will go through with Yiannopoulos' scheduled appearance on September 20.

"This afternoon, the DePaul College Republicans were informed DePaul University’s administration is refusing to allow guest speaker Milo Yiannopoulos to return to campus. According to the University, “having consulted with Public Safety and having reviewed last Spring’s events, it is clear that it would not be possible for DePaul to provide the security that would be required for such an event.”

Essentially, this is a heckler’s veto. DePaul is setting the precedent that if enough students protest a speaker who has the wrong opinions and disrupt it, administration will not allow that person to speak. For a group that has minority viewpoints on campus and revolves many of our events around speakers talking about those viewpoints, this is extremely troubling.

Never mind that Milo is a gay conservative, a rare opportunity for students to learn from a unique individual. Never mind that our first event was disrupted and cancelled expressly because security refused to do their jobs. Never mind that our guest was threatened on stage for everyone to see, yet he’s kind enough to return and finish our talk. Never mind that DePaul has happily hosted a convicted terrorist, Rasmea Odeh, on campus.

Despite all this, apparently Milo is the “inflammatory” one, rather than the radicals who ended our event in the first place. For a University that supposedly maintains the founding values of free speech and equality, one that claims administration “will continue to work with student organizations to sponsor events and speakers representing a broad range of opinions,” this is disgraceful.

We do not accept DePaul’s contemptible response and will be having Milo Yiannopoulos on campus September 20.

Marlo Safi is a Pennsylvania Campus Correspondent, and reports liberal bias and abuse on campus for Campus Reform. She attends the University of Pittsburgh, where she studies Pre-Law, Psychology and Political Science and serves as a columnist for her student newspaper, The Pitt News.