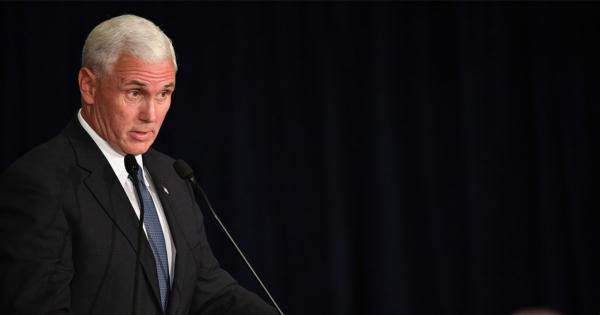 University of Notre Dame students have begun a “#NotMyCommencementSpeaker” white board campaign to protest the invitation of Vice President Mike Pence to speak at Commencement.

Last week, seniors Immane Mondane and Jourdyhn Williams invited students to take photos holding white boards with “direct quotes from Pence that are racist, sexist, homophobic, xenophobic, offensive, or ostracizing to members of our community,” along with the hashtag “#NotMyCommencementSpeaker.”

“You may also write about why you feel unsafe with the presence of Mike Pence on our campus.”

Alternatively, students could also write about why they “feel unsafe with the presence of Mike Pence on our campus,” with daily opportunities to have photos taken with their whiteboards through the week.

Once all the photos have been compiled, the organizers plan to share them on social media in hopes of starting a “discussion” about Pence’s invitation.

“For me personally, [Pence] represents the larger Trump administration,” Mondane told The Observer. “His administration represents something, and for many people on our campus, it makes them feel unsafe to have someone who openly is offensive but also demeaning of their humanity and of their life and of their identity.”

While the photos do not appear to have been posted yet, Mondane provided The Observer with several examples of the complaints that students shared.

One student used a quote from Pence favoring traditional marriage, writing on their board, “‘Congress should oppose any effort to put gay and lesbian relationships on an equal status with heterosexual marriage’ -Pence #NotMyCommencementSpeaker.”

Another read, “Because I am the daughter of Immigrants Family [sic] of LGBTQ folks.”

The organizers said they hope the photo campaign will start a larger conversation beyond the “white, conservative Catholic” narrative at Notre Dame.

“I feel that is offensive to such a large population here at Notre Dame, and I also believe it goes against certain Catholic Social Teaching, which is something the University likes to broadcast that it stands behind, but it picks and chooses when it wants to stand behind them,” Williams complained.

While Notre Dame usually invites the president to give its Commencement address during his first year in office, this year the administration opted to invite Pence instead after students launched a preemptive protest campaign objecting to Donald Trump.

The attempt to avoid controversy hasn’t panned out; in addition to the whiteboard campaign, a number of student groups have spoken out against the invitation of Pence, including the Diversity Council and the College Democrats.