Prof calls for ‘repealing the Second Amendment’ after Vegas

An adjunct professor at Eastern Connecticut State University argued in favor of “repealing the Second Amendment” after the tragic massacre in Las Vegas.

“Get used to it, folks. This will never stop,” Professor Bob Englehart wrote on his Facebook, before claiming that the only way to “slow it down” is “by repealing the Second Amendment and even then it would take a generation or two.”

"Repealing that cursed amendment would make it easier to control guns with restrictive laws."

“But repealing that cursed amendment would make it easier to control guns with restrictive laws,” he continued. “Right now, there’s a creep out there with a perverted belief system thinking, ‘fifty-eight? Hell, I can top that.’” 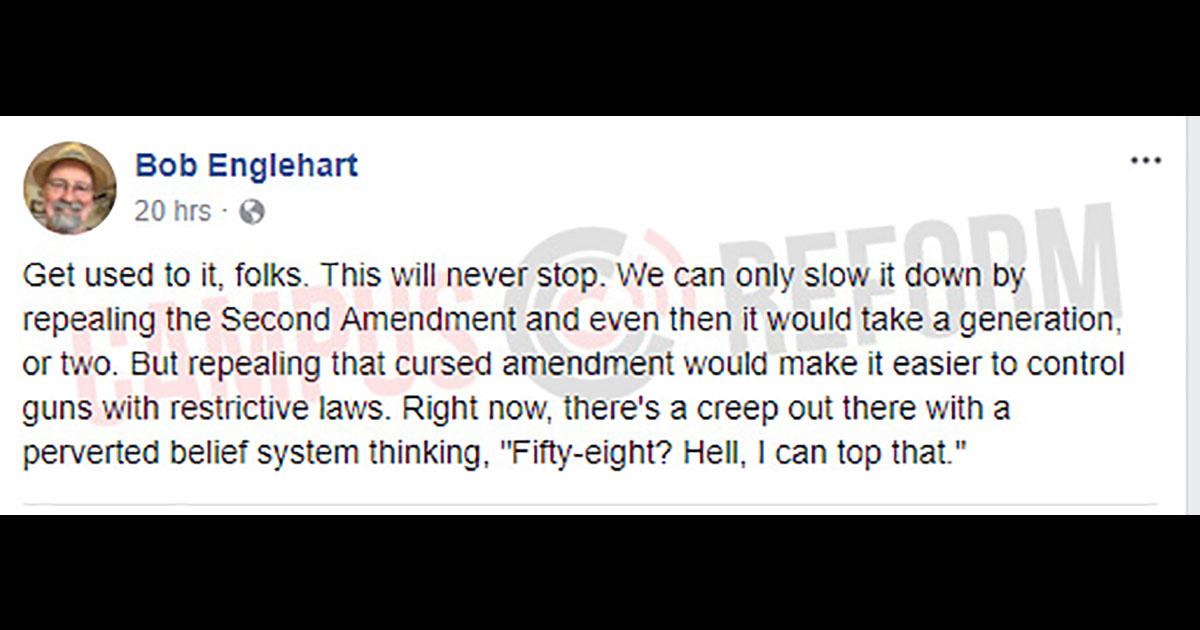 Additionally, Englehart used the tragedy to point out the ineffectiveness of open-carry laws by arguing that at least one of the concert-goers was surely carrying.

“Certainly there were people packing in that crowd in Las Vegas. Open carry for protection? Dream on,” he added.

Later on Twitter, Englehart turned his sights on President Trump, calling him a “dumb f*ck” who has failed to keep Americans safe.

“That dumb f*ck in the White House said he’d keep us safe. Oh, right, from Muslims and Foreigners,” Englehart remarked.

“I’m angry and frustrated with the President,” he told Campus Reform when elaborating on his statements.