The Georgia Tech Student Government Association published a response to Roe v. Wade that advised students to prepare for arrest while protesting.

Before the slide was removed, Campus Reform obtained a screenshot of the post.

“GT SGA has once again overstepped by posting this slide deck,” GT Turning Point President Megan Johnson told Campus Reform. “It is unacceptable for what is supposed to be a politically neutral organization to alienate the portion of the student body that supports life.”

The post originally provided tips on how to protest Roe’s reversal, including disabling phone data, disguising identities, and preparing for possible arrest.

That post was removed, however, and replaced with a corrected slide deck.

Campus Reform obtained a screenshot of the original post featuring the advice for being arrested at protests. 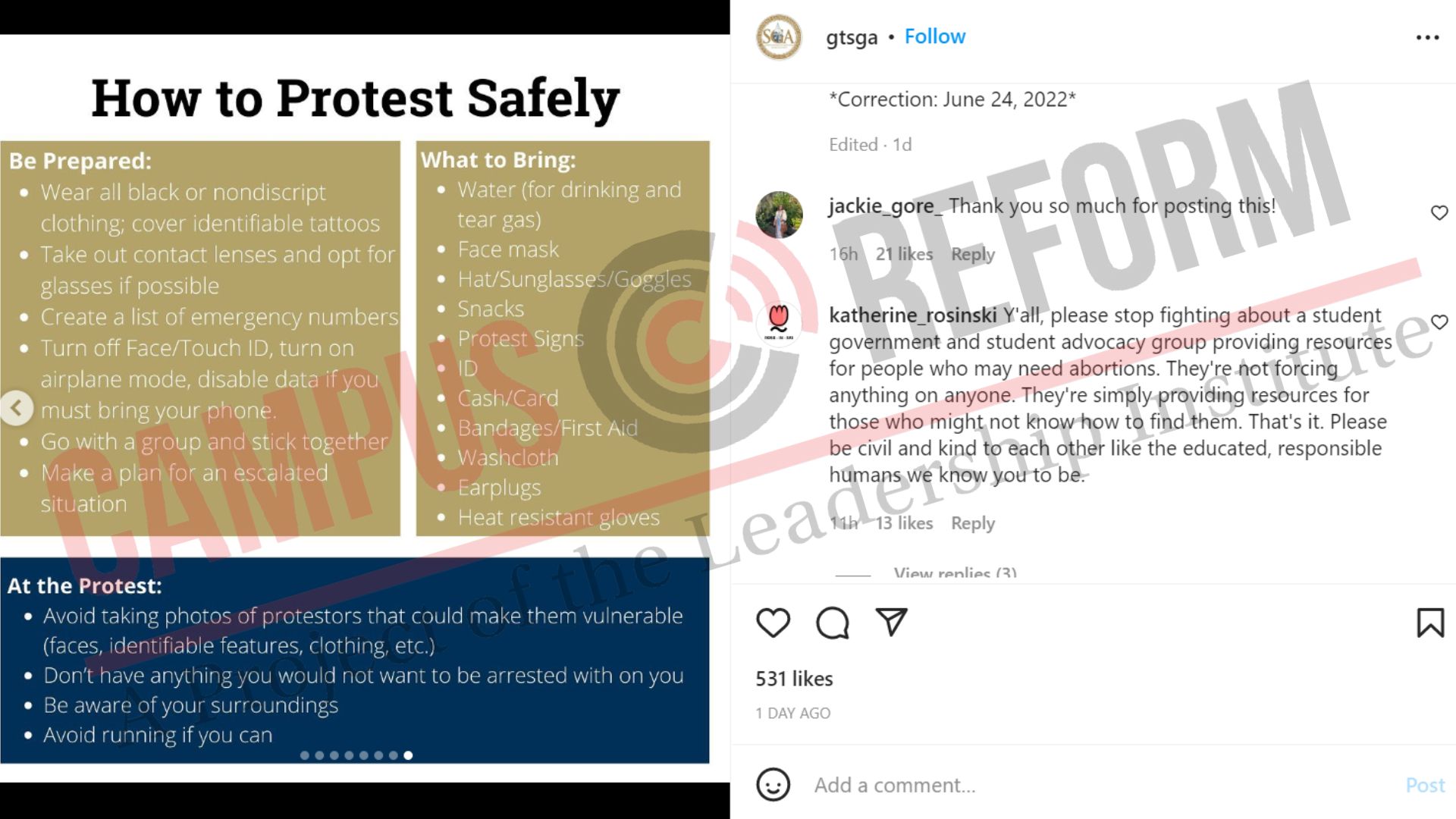 The post also urged students to rely on Democrat lawmakers to codify Roe v. Wade into law and make abortion a party platform, and encouraged students to contact their state representatives to overturn new abortion laws.

Official Bylaws of the Undergraduate SGA Article VII states that no student “shall be denied the rights and privileges” of SGA representation because of political affiliation, requiring SGA to consider the viewpoints of all undergraduate students.

“It shall be the accepted practice of the House of Representatives to represent the majority opinion of the Undergraduate Student Body while providing fair consideration of the views of all undergraduate students,” the bylaw reads.

“If they truly cared about women, they would’ve provided legitimate resources that support women in crisis,” she clarified.

Johnson also accused the SGA of not representing the viewpoints of the entire student body, which includes expecting mothers and new parents, and suggested promoting pregnancy resources such as Standing With You.

“They failed to provide pro-life resources… or even acknowledge the pro-life cause,” Johnson said. “I am frustrated that the trend of SGA alienating… conservative[s] has continued and become increasingly left leaning.”

“Solidarity and leaning on your community is crucial now more than ever,” GT SGA wrote. “While a lot has changed, there are still ways to advocate for change and get a safe abortion in Georgia.”

Georgia Tech's SGA has a history of bias against pro-life students at the Atlanta campus. In 2020, Alliance Defending Freedom filed a lawsuit on behalf of the Students for Life chapter against the SGA after it failed to fund pro-life speaker Dr. Alveda King.

Currently, abortion is legal in the Peach State up to 20 weeks. House Bill 481, also known as the “Living Infants Fairness and Equality (LIFE) Act,” would ban abortion after 6-weeks.

The bill was first introduced in 2019 but was immediately blocked by a lawsuit. The 11th Circuit Court of Appeals will hear an appeal from a federal judge to determine if the bill will be enacted into law following the Supreme Court’s decision to overturn Roe v. Wade.

Campus Reform contacted GT SGA and the university for contact. This article will be updated accordingly.